Capcom's Xbox 360 zombie beat-em-up Dead Rising doesn't hit retailers' shelves for another week, but crowds have already begun to form outside of software stores across the country. Anticipation on this level is typically reserved for the launch of a brand new system and not an individual game, so we hit the local mall to see what's got everyone so excited.

"MMRRRFF..." croaked one enthusiastic fellow, moments before he lunged at me and playfully tried to bite my neck.

"Ngh." agreed his companion, a man dressed in a beaver mascot costume which had fallen into disrepair. To emphasize his point, he shuffled into me and repeatedly knocked his oversized stuffed head into my chest.

Not everyone was excited about the game for the same reason, though.

"Ggghll!" explained a brave woman who had ventured out into public despite numerous embarassing lesions covering her body and what appeared to be a broken jaw. Her dedication in the face of certain ridicule from her fellow shoppers illustrated how important this game is to her.

While it's great to see people get so excited about video games, I hope that something can be done to organize the crowds a bit better. As it was, people were sort of milling about with no rhyme or reason, bumping into each other. I even witnessed several scuffles break out when shoppers from other stores walked by, presumably intruding on the Dead Rising fans' spots in line by accident. To the software stores out there, please take the time to rope off a clearly marked area for the line to start and end at, and maybe even treat these customers with complimentary slices pizza or something. Some of those people looked absolutely famished.

Intro Movie Commander (pc) - Players sit through approximately 20 hours of overly flashy videos of various companies' logos. Each video can be skipped by pressing the Spacebar at a specific point, but finding that point will prove to be a challenge.

Super Fast Challenge: The Race For Second Place (Xbox 360) - In this racing sim, no matter how well you perform the AI will always find a way to defeat you. Always. From miraculous 400% boosts in speed to invulnerability to simply disappearing behind you and then reappearing at the finish line, the computer will use any method it deems acceptable to beat you. Challenging!

Walkthrough: The RPG (PS2) - Some of the more difficult items to obtain in rpgs are pretty much only available once you're read a walkthrough online thanks to nonsensical solutions such as "visit the graveyard at 11:18pm and take three steps to the left, then two to the right and drink a mana potion". In Walkthrough: The RPG every single element of the game is like this. It's literally impossible to advance past the opening sequence without plugging a fishing pole into the second controller port and perfectly emulating Paula Abdul's dance from her 1991 video "Straight Up Now Tell Me", although nothing in the game indicates that this is what you must do. This is the perfect rpg for people who love looking up solutions on GameFAQs and hate actually playing the games they buy. 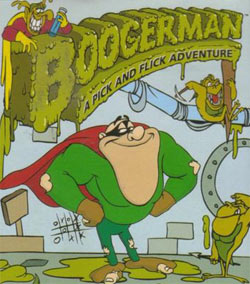 November 18th, 1994 was the day that changed everything. On that date a plucky independant studio named Interplay released Boogerman: A Pick And Flick Adventure on the Super Nintendo and Sega Genesis. While gamers everywhere were captivated by the journeys of protagonist Snotty Ragsdale, Boogerman would have a greater impact on every game to come after it.

Boogerman introduced the concept of jumping. Other games had attempted this gameplay mechanic, but none had been all that successful at its implementation. Since the realease of Boogerman, nearly every game has featured jumping.

Boogerman also featured characters, a concept which is still used in many games today.

When Boogerman flicked his boogers, they would fly through the air in a close approximation of real life physics, then stop when they hit an enemy. Take a look at the physics going on in the critically acclaimed Half-Life 2 and try to imagine how different the game would be if Boogerman had never been made.

Defeating the final boss would end the game. Boogerman was revolutionary in that you could shut the console off at this point, or at any point during the game.

Lastly, the most telling proof of Boogerman's profound impact on the industry is revealed when you examine the sales figures. Before the game's release, the video games industry barely had enough sales in a year to buy a large island. After Boogerman, video games now make as much or more than the film industry. Now that's influence.

Civilization IV: Warlords
This combat-centric expansion will leave you wondering why there was ever an option for diplomatic victory in the game and, for reasons I don't fully understand, leave you craving waffles. 9/10

International Cricket Captain 2006
Cricket may make no damn sense, but at least you'll be distracted from that by the game's hideous graphics. 4/10

Warpath
The path of war takes you through every steel hallway in the universe. 3/10

CivCity: Rome
Are a trillion city-managing games in one summer enough, or do we need more before we finally understand that ancient Rome was a pretty cool place? 7/10

NCAA Football 07
The best installment of this excellent college football series to date, very much worth buying. 8/10

NCAA Football 07
The worst installment of this excellent college football series, avoid at all costs since EA decided to publish the game despite a game-ruining bug that rules a running back down at the point of contact instead of where his body actually goes down. 1/10

Miami Vice: The Game
This is a decent enough game, but it doesn't even attempt to explain what was going on with Don Johnson a few years ago when he was caught with Swiss bank paperwork detailing 8 billion dollars in transactions. 7/10

Valkyrie Profile: Lenneth
This port of a six year old Playstation game is better than every rpg released for the PSP to date, but I have an irrational hatred of the name "Lenneth" so I'm deducting a point from the total score. 8/10

Tekken: Dark Resurrection
This is the most fun you can have punching polygonal people while away from your home aside from the annual Defenseless Polygonal Persons Convention in Topeka, Kansas. 9/10