Thursday, Mar 24, 2005 by Zack "Geist Editor" Parsons (@sexyfacts4u)
Dr. David Thorpe and Zack Parsons journey again through the time portal back to the fashion magazine advertisements of the 1960s and 70s. They survived the ordeal once, but can their sanity endure once again?!

Dr. Thorpe:I couldn't wait to get back into bashing these old magazine ads. Their absurdity was so relentless that they invaded my brain and made me see orange and green paisley swirls behind my eyes while I slept. So, once again, we must exorcize these horrifying demons of fashion the only way we know how: without any regard to making sense.

Zack:If mankind ever develops a means to travel back in time I'm glad we have been here to prepare the future timenauts for the horrors they will experience. Jumping 10,000 years into the future and finding out that mankind has been reduced to feed stock for super intelligent parrots is nothing compared to male undergarments from the 1960s and 70s. 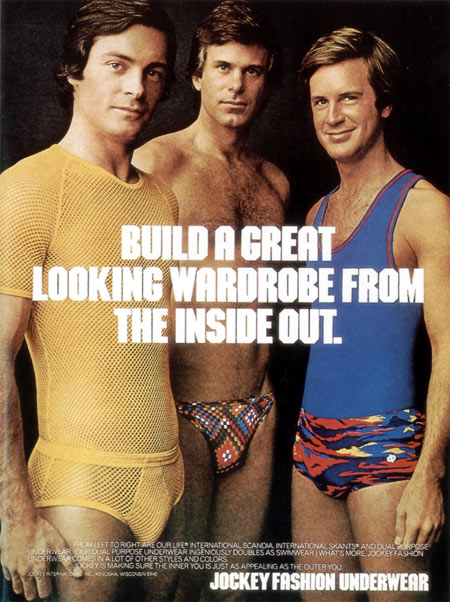 Zack:I believe they are still on the "guts" part of the internal wardrobe.

Dr. Thorpe:Is this an ad for the benefits of castration?

Zack:Look at the dude in the middle. I've seen Hopi Indians making jewelry like that along the roadside in Arizona. I wonder if his other pair of underpants is a dream catcher.

Dr. Thorpe:The guy on the right looks like he's wearing the underwear of some GI Joe Ninja Force action figure.

Zack:Yeah, the Cobra guys who were camouflaged to blend into a paint mixer at Ace Hardware. I like the third guy's all-mesh underwear. They're just right for those of you who want to defeat almost every reason for wearing underwear.

Dr. Thorpe:This mesh underwear... there has to be a reason. Maybe he wants everyone to smell him just that much more.

Dr. Thorpe:God, I wish it wasn't instinct to look at his mesh outfit and try to make out some pube through it. At least I HOPE that's instinct. If I'm doing that on my own... I'd rather not think about the implications of that.

Zack:Complicating matters is the fact that the guy is neck-to-thigh pubic hair underneath that chain link fence of an outfit. You're searching for a single hair when you're actually looking at a panoramic vista unbeknownst.

Dr. Thorpe:I can't see the forest for the trees. And that little bitch on the right is laughing at me for it.

Dr. Thorpe:The expressions on their faces seem to suggest that the observer has just walked in upon this scene. They look like they're saying "so... here you are... and here we are... what shall we do now?" But really they're just beating around the bush, because they know exactly what they have planned. And it involves trench coats, fake pant legs, and a junior high school. At least they're not packing anything that'll scare a junior high schooler.

Zack:Maybe they weren't born with anything to scare a junior high schooler, but they've certainly raided the Ninja Force hamper for terror missions.

Dr. Thorpe:Oh shit. The Ninja Force guy... is that a cobra logo on his briefs?

Zack:I think it's a miniature Star Trek communicator. "This is Ensign Featherweight, three to beam aboard." This is what away-teams do before a mission to get psyched up about beaming down to a planet.

Dr. Thorpe:Hey, check it out; these guys have no idea what to do with their hands for this photo.

Zack:The guy in the middle has been handcuffed.

Dr. Thorpe:Imagine them at the photo shoot, trying to find places for their hands that don't look overly determined or suggestive. They must have been fidgeting like hell until the photographer said "just sort of rest them on your thighs like nobody would ever do."