Players hoping to move their characters in World of Warcraft from one server to another have finally gotten their wish! Sort of! If you're lucky enough to reside on one of a handful of preselected servers you can now transfer one character to another server for the perfectly reasonable price of $25. If that's too much, you can pay $5 to only transfer one of the following parts of your character: Head, Torso, Left Leg, Right Leg, Right Arm, Uvula.

The Joy Of Tedium

Thanks to early reports of the success of NFL Head Coach, many publishers have begun to look for ways to combine their existing franchises with the intense thrill of spending several hours planning for every possible contingency. Rumors have already begun to circulate about upcoming titles such as Guitar Study Hero, Serious Sam: Let's Think This Through, God Of Planning For War, Sonic The Hedgehog: Slow Down Buddy, and Wario Ware: Research Party.

With the incredible Half-Life 2: Episode One still fresh on my mind, I reflected upon the greatest moments in the series, and Gordon Freeman's reactions to them. In this exclusive retrospective are Gordon's most memorable lines of dialogue.

"This tram ride is sweet. I can't imagine how horrible it would be to have to walk all the way out of here."

"Why don't we have a robot or something to push this sample into the core? This looks sort of dangerous."

"Yes Barney, we should have a beer when this is all over. Maybe even two! Ha ha."

"I went to MIT and got a degree in KICKING YOUR ASS! Boomshakalaka!" 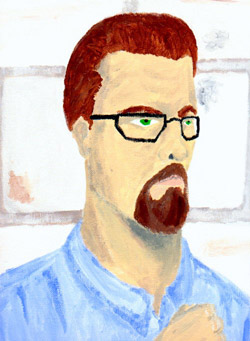 "Has anyone else noticed a creepy guy in a suit lurking around this Lambda complex?"

"Zombies? Is this a Michael Jackson music video, or a computer game? Wink wink!"

"Xen is pretty creepy, but I'm enjoying all this jumping so much that it doesn't really bother me."

"Thanks for the gravity gun, but I dunno. I've never come across a situation where I needed one to get through an area before."

"Wait, Dog, why don't you come with me instead of going home? Your ability to lift objects that weigh several tons and kill like fifty combine soldiers without taking any damage might help in some way."

"This hovercraft is awesome. I hope I never have to stop driving it."

"Alyx, if we don't get out of these harnesses before Dr. Kleiner kills us both, I want you to know something. I love you. I've always loved you. Oh look at me, now I'm crying again."

"Hey, I'm buried in the rubble over here! Come get me out!"

It's hard to believe Valve actually considered not giving Gordon any speaking lines, isn't it?

Titan Quest
Diablo 2 act II, now with performance issues even on top of the line computers! 7/10

Over G Fighters
A military flight sim worth playing just to say "It's over, G" after you've taken out your first bogey. 8/10

Crusty Demons
When you go to Hell and have the choice between being tortured by actual demons and playing Crusty Demons, ask if you can go to Heaven instead and you might catch the evil version of St. Peter off guard. 4/10

NFL Head Coach
If I really wanted to spend hours getting into painstaking detail preparing for games instead of just playing them, I would have actually become a head coach in the NFL or bought this pretty good game. 7/10

Pirates of the Caribbean: Legend of Jack Sparrow
Never trust a pirate to make a movie tie-in video game. 5/10

Ruff Trigger: The Vanocore Conspiracy
The title says it all, folks. 2/10

AMF Xtreme Bowling
As we predicted, this is by far the best extreme bowling game to date. 1/10

Micro Machines V4
The cars are tiny, as is the list of improvements to the series since it first appeared on the NES. 4/10

World Tour Soccer '06
Not great by a longshot but it is just barely enough to do the job, sort of like ESPN's coverage of the World Cup. 6/10

Lara Croft Tomb Raider: Legend
Just like the game of the same name that was released on other platforms earlier this year, but with exclusive horrible controls that took a few months of added development time to perfect. 6/10

Legend Of Heroes 2: The Prophecy Of The Moonlight Witch
Between this and Astonishia Story (reviewed in our last article), the PSP has establishing an unrivaled dominance of the "cliched and boring Japanese RPG" genre. 4/10