Reasons For Buying A Vita 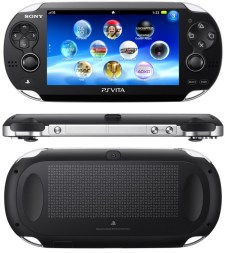 The launch of Sony's PS Vita has been met with the sort of enthusiasm that's typically reserved for blind dates at the Olive Garden and tax preparation. Aside from some nice hardware and a software lineup that dutifully checks all the boxes in the portable PlayStation launch checklist, the pricey unit isn't exactly turning heads. So why would someone buy a Vita?

Crusader Kings 2
I still have no idea what I'm doing, but for the first time in a Paradox title I feel like I'm getting close and enjoying every minute. 8/10

Gotham City Impostors
Take the 2007 version of Shadowrun, nick some of Team Fortress 2's attitude, add appearance customizations that are initially funny if a little shallow and poorly textured, then top it all off with horrendous matchmaking. 5/10

The Darkness 2
Unexpectedly imaginative, fun, and fantastic looking - basically what the first game should have been instead of a dreary slog with some creative elements that ran out of steam somewhere in the WWI trenches. 8/10

King Arthur: The Role Playing Game 2
And just like that, Arthur stumbles, accidentally ramming Excalibur back into the stone for good. 4/10

Kingdoms Of Amalur: Reckoning
You will feel more of an emotional connection to the randomized loot than any part of the story, but that's perfectly fine if you're capable of enjoying a video game as a relatively shallow collection of well-executed systems. 8/10

NOTE FROM THE EDITOR: Despite what you read above, this game is actually quite terrible. 5/10

NOTE FROM THE CEO OF SOMETHING AWFUL LLC, VERY INTERNET PERSON: Seriously, this game stinks hardcore, and I wholeheartedly agree with the opinion of the "EDITOR."  Dennis, see me in my office first thing Monday morning.

UFC Undisputed 3
Feels just like someone's sitting on your chest and punching your head - in a good way! 7/10

Twisted Metal
A solid representation of Twisted Metal that really could have used more graphical variety within each environment, better texture work, and voices that didn't come from the cutting room floor of Duke Nukem Forever. 6/10

Lumines
It's Lumines, it's the best edition of the game since the original, and it has XP so you can even fill up bars while you play. 9/10

ModNation Racers: Road Trip
The game looks much worse than its console counterpart and is lacking multiplayer, but in their place you get horrendous slowdowns in the customization menus where you'll be spending a lot of your time. 5/10

FIFA Soccer
The best (and only decent) use of the Vita's back touch pad... thing: lining up shots by using the sensor as a representation of the similarly shaped goal. 8/10

Uncharted: Golden Abyss
It definitely has things from the console predecessors such as escapes from burning buildings, but Golden Abyss forgets to give those moments meaning or even create its own unique setpieces. 6/10

Wipeout 2048
Doesn't look good enough to make up for the surprisingly slow framerate, doesn't do anything well enough to excuse the lack of Captain Falcon. 6/10