Hollow Earth websites, submitted by VindiKatif. There are thousands of theories about the nature of our beloved planet Earth and, indeed, our universe at large. The dumb ones end up here. This site is just a jumping-off point to a disturbing number of other sites, all with their own crackpot theories. Many involve ghosts, aliens, and all of them consider Journey to the Center of the Earth to be a definitive scientific text. The central dumbassery of this melting pot of stupid is the "Hollow Planet" theory, which asserts that Earth is totally hollow. Much of their proof comes from blurry pictures taken by the Hubble space telescope. 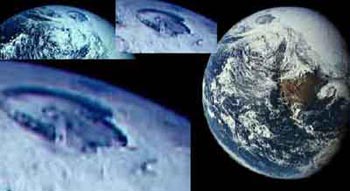 If you believe that those pictures prove there's a hole in the North Pole that goes into the empty center of the planet, then you believe that a blurry figure on a surveilance tape is a ghost, and that cardboard and rusted metal are the two key components of interstellar spacecraft. These people do! I blame the bulk of the crackpotation on Jan Lamprecht. Jan's dissertation on "Hollow Earth Seismology vs Solid Earth Seismology" is a thrilling combination of hilarious whining, poor grammar, and lines copied out of a high school physics book. 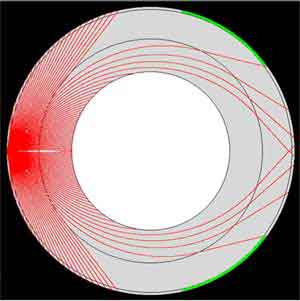 Let me show you how my Hollow Planet seismic model can explain the Earth's seismology better than the existing solid Earth seismic model - and yet not one person at any university has shown the slightest interest in this.

The purpose of this page is to demonstrate a number of most amazing things about seismology to the Reader in the clearest and simplest manner possible. When I wrote my book I did delve into the many deeper and more technical aspects but I want to put that aside for now.

The purpose of this exercise is to show people visually a number of very important things which you will not find in any book on earth. (Note: This material lends itself to a TV/documentary presentation and I have tried unsuccessfully for the last 2 1/2 years to get someone to take some of my material and show it on TV because I believe it will blow people's minds). The solid Earth model is divided into three major segments (we will ignore the smaller ones as they do not affect the bigger picture). Those segments are (from the centre) : the Inner Core, the Outer Core and the Mantle.

Lesson #1: The Earth is NOT a ball of molten lava. The first question everyone asks me when they hear of the Hollow Planet idea is: "Where does lava come from then?" The (completely FALSE) impression schools have created in everyone's minds is that the Earth is this red-hot ball of lava. They then imagine that lava from volcanoes comes from the centre of the Earth. Ask any geologist or seismologist if this is true and you will discover they disagree. Standard geology and seismology texts tell a different story. Scientists know that most lava is slightly radioactive and they believe it is produced either by decaying radium (decayed uranium) or through stresses in the crust. Lava is created by heat generated within the crust of the Earth. The crust is said to be no more than 20 miles thick, although to be honest nobody has ever actually penetrated the crust so we really do not know what (if anything different) lies beneath it. Scientists will tell you that lava is a crustal phenomenon and all lava comes from no deeper than 20 miles down.

And it goes on and on. The whole thing is actually quite convincing, until you realize that it's the dumbest thing since NBC gave Emeril his own sitcom. These people will put up any link that they can possibly twist to help lend a hint of credibility to their moronic ideas. From this one sight, you can learn about everything from lizardmen to underground cities which are, in turn, populated by lizardmen. We are encouraged to join their "Spectacular YahooGroup!" Please do.