Things That Will Probably Happen In Assassin's Creed III

The Assassin's Creed games are stupid. Don't get me wrong, I love AC2 and Brotherhood. They give you a lot to explore, look really nice, and keep you occupied with all sorts of side content. That said, they're incredibly stupid. 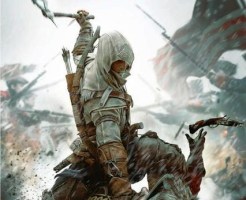 The sci-fi conceit that connects all the games isn't very good, and its execution is laughable. Every major figure in history possessed a magic doodad and secret societies and blah blah. Even if you go along for the ride, it's not told very well at all. A central story is teased through impressionistic glimpses and moments of seemingly important posturing, but that story is never actually told, because doing so would require some forward movement that would only pay off with excellent writing.

So we have fun running around and stabbing people in neat settings, trying not to think too hard about all the coincidences we're supposed to be amazed by and all the lazy historic landmarks that the series awkwardly gropes. We put up with all the embarrassing shallow video game character melodrama because it's outweighed by the gameplay. And, really, as long as the games are competently made (which isn't a sure thing following Revelations) that's fine.

Now we know that the inevitable Assassin's Creed III will be set in America during the Revolutionary War. I'll be there on day one with everyone else, but in the meantime how about some predictions?

Syndicate
Great co-op that does as much as you probably could with the license in an FPS, though the single player campaign is a series of lifeless corridors with almost as many cover spots as cliches. 6/10

Asura's Wrath
Combat that looks great on paper but never really feels satisfying, QTEs upon (repeating, unavoidable) QTEs, and CRAAAAZY things happening on screen that carry absolutely no impact beyond making you think "huh, I guess that guy is large". 4/10

SSX
I'd like to zip around the screen instantly like Space Harrier and have arcadey fun on every inch of these amazing looking mountains, not barrel forward with the turning radius of a Resident Evil 1 character. 7/10

Army Corps Of Hell
If this was anywhere near as cool as its title, I'd be giving it a thumbs up in a 90s magazine ad, wearing a rad pair of shades and going "WHOA!" as my hair was blown back. 5/10