Holding my daughter close, I tell her that she means the world to me, and that I will always protect her from the madness brewing outside. I am wearing superhero boots, overalls, and an oversized Blanka mask that covers my entire head. A bloody fireaxe rests in my hand.

Immediately after this touching moment, I pick up a container of coffee creamer and chug the entire thing, then head into the bathroom. There, I lose the Blanka mask in favor of a scruffy beard and preposterous eyebrows.

This is Dead Rising 2. I’m in my second, and obviously more serious, attempt at a playthrough. 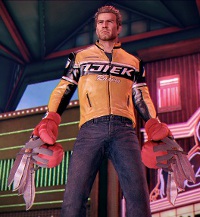 Structurally, Dead Rising is Groundhog Day with zombies. Things can (and will) go wrong, and when they do you have the option to start over with your stats, money, and certain bonuses such as keys intact. You can completely ignore the story and dick around while you level up and explore the game world. I recommend this. In fact, dicking around is in many ways more fun than any missions the game throws your way.

I’ve just rescued a survivor, a paramedic. Being the friendly sort, I place a shotgun in his hands and tell him to follow me to safety. Then I proceed to drag him across half of Fortune City, stopping every now and then to try on sundresses and cowboy outfits while the paramedic screams, blasting away at approaching zombies. Some of his shots go wild and graze me. I won’t forget this.

We enter a food court and come across a psychotic chef preparing a human stew. Being a psycho, he decides that I’d make a great addition to the dish. During the ensuing battle, I position the paramedic directly between myself and the chef. The psycho pounces on the hapless man. Smiling, I hack them both to bits with a lightsaber fashioned from a flashlight and a bag of gems.

In the silent aftermath, I contemplate the meaning of it all while eating a hamburger in three sloppy bites, then take a few swigs from my beer hat until I lean forward and puke on the floor.

Psycho bosses can provide some entertaining moments, but for the most part they go against everything that makes the rest of the game fun.

Navigating a horde of zombies which can each be easily avoided or killed in one or two hits allows for experimentation and presents an inherent challenge in knowing when not to push your luck. Bosses are ultra-tough and fast moving enemies that require precise controls and defenses which aren’t actually in the game, as well as one of a few specific anti-boss weapons. They certainly provide a challenge, but that challenge is unsatisfying.

Thankfully, when I found myself frustrated by one of these encounters I simply vowed to come back and beat the shit out of them on another playthrough, preferably after unlocking the Ghosts N’ Goblins armor and enough inventory space to hold ten gallons of life-restoring orange juice.

For every minute of completely optional bullshit, there's an hour of goofy fun waiting to be explored, gambled in a high stakes game of strip poker, duct taped to a lawnmower, mixed with vodka, and placed on your head in a kids' clothing store. Stupidity is my favorite gameplay mechanic in Dead Rising 2. It's more rewarding than any mission, and has the added benefit of making you strong and resourceful enough to survive the game's weakest points.

It seems that people have been referring to game achievements as “cheeves”, “cheevos”, “cheevies”, or “cheevers”. Please note that using any of these words, regardless of your intended level of irony, will instantly make you as terrible as anyone that has ever used “mans”, “for the win”, photoshopped a motivational poster, or sexually abused children.

Civilization V
Streamlined in all the right ways, as addictive as ever, and full of rampaging barbarians that always wait until the perfect moment to come out of hiding to raze your farms and kidnap your workers. 10/10

Amnesia: The Dark Descent
I don’t know what’s scarier, playing this alone with the lights off or the fact that so many people will miss out on it because it's a first person game that doesn't play like a standard FPS. 8/10

Dead Rising 2
Pull up your watch to set your destination arrow to the review above, cry in alarm as yet another a zombie attempts to chomp your junk. 9/10

Wii Party
Is everyone in on a really big practical joke, or was this not already a game? 6/10