Video games should, at their basest level, be fun. As the industry grows, however, we're slogging through bullet point lists of expected features and terrible "cinematic" cutscenes or struggling with half-assed motion controls in games that feature little personality and less innovation. To compound this, people at high levels are making decisions and saying things that steer us toward a joyless future that seems designed to rape you in the ass and take your money at every possible opportunity. Each month, we call attention to the people and stories that are stabbing fun's face.

How It's Ruining Games: 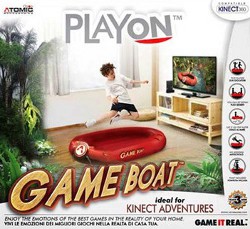 In the future, all gamers will be divided into two categories: Those who have an inflatable boat in their living room, and those who should kill themselves.

At least, that's what PlayOn, creators of the Game Boat are hoping. Their blow-up raft is designed to be placed on the floor so you can stand inside it while playing the river slalom mini-game in Kinect Adventures.

That's right, it's a peripheral for one mini-game. That's goofy. Having a fucking raft in your living room is goofy. Perhaps the goofiest thing of all? It serves no purpose. It doesn't actually interact with the game in any way.

How It's Ruining Games:

By having this product description...

Show them all, the Governor is not to be trifled with!

Where have you been all those years? Lots of things have changed. Cities have grown, new people arrived... It's all good, but some things cannot be accepted just like that!

Howdy! Finally it's there, Governor of Poker 2! And for the real Governors of Poker, we offer an even more packed Premium Edition with lots and lots of extra's! Lots more cities to conquer and tournaments to play, interactive wallpaper, downloadable theme music, an extra 'Pro' difficulty mode and more&.

Do you want it all? Then get ready for the most exciting adventure in the Wild West!

... while actually just being a low budget poker game, and failing to live up to the promised insanity.

How They're Ruining Games:

At the London Games Festival, Gearbox head of marketing Steve Gibson had some interesting things to say.

By "interesting" I mean "wrong". No PC game's multiplayer component has ever been walled off to customers from different retailers. The way I see it, this statement could be one of two things.

1) Completely made up. A distinct possibility. Gearbox has already attempted to discredit Valve, claiming that Steam was unfair to small developers, a statement which was then rejected by actual small developers who had worked with Steam. They also lied about pretty much every facet of the PC version of Borderlands in the leadup to its release, then stated that they "listened to what the customers wanted" by addressing fundamental problems via DLC rather than free patches.

2) A genuine misunderstanding of how multiplayer works on the PC. If you doubt that a company could be so clueless about this topic, you probably haven't seen the Gamespy matchmaking logo in the PC version of Borderlands or attempted to connect to a multiplayer game within a month of release.

Medal Of Honor
Seriously, fuck this generation of shooters and the focus testers they rode in on. 6/10

MySims SkyHeroes
At least that Snoopy air combat game had the decency to include actual art design, textures, fun, and be an inexpensive downloadable game. 4/10

NBA 2K11
Now you can play as Michael Jordan's ego and pull a spin move to avoid facing the reality of age and a long-abandoned career - assuming his model can move with that enormous chip on its shoulder. 8/10