If there's one thing video game players love, it's being badass, unstoppable gamelords that blow through every supposed "challenge" thrown their way in record time with a cocky grin on their Gamer Grub-encrusted mouths while weaker nerds toil in obscurity.

That, or proudly proclaiming all of the above on internet forums.

Nearly every game has a subset of people bemoaning the lack of a Hardcore mode, where death is permanent and the difficulty is cranked to 11. Taking aim at these masochists, Fallout: New Vegas' hardcore mode looks to present some serious challenges. Will their approach be hardcore enough?

If you die in the game, not only do you lose your character but you die in real life AND all the savegames for other titles on your system are deleted.

All items - including equipment, inventory and bottlecaps - degrade by 1% each time you take a step. Nothing can be repaired. There is a Repair skill, but using it causes your character to strike his throat repeatedly with the Pip Boy until its dull corner punctures a hole in his jugular.

You must eat and drink every three minutes to stay alive. Food must be manually prepared by the player following actual recipes and cooking methods. If it is overcooked or poorly seasoned, it will disappear without being eaten. If it is the slightest bit undercooked, the main character will die.

Players whined about the effects of radiation in Fallout 3, so this time around you will begin the game with a near-lethal dose of radiation that renders you blind.

No fast travel. No running. Walk speed has been reduced to a stationary lean forward. 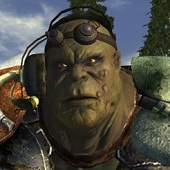 To simulate the poor conditions of firearms in the post-apocalypse, all guns are more likely to misfire or jam than to shoot. When you do get a shot off, it will be as accurate as pulling the trigger in S.T.A.L.K.E.R. while unscoped, running, and attempting to hit a target nearly a mile away.

Your attacks do 0.001% of normal damage to your enemies, and 300% damage to yourself. On the other side of the coin, enemy attacks scan your computer's browser history and email it to all of your contacts, then shut off your computer.

V.A.T.S. is disabled, and replaced with A.A.A.A., which simply makes you turn counterclockwise in slow motion while being ravaged by bullets.

Conversations are much more involved and rewarding in the main game, with many more options to help you feel connected to the setting. In hardcore mode, your only response to every line of dialogue will be, "I am a child murderer. Here, take my weapons and armor before you kill me."

Upon entering a casino with the hopes of gambling, security will escort you into the back and crush your head in a vice. You don't want to know what happens when you get caught cheating.

Companions display different levels of affinity for you. The first is "Murderous Rage", followed by "Feeling A Little Guilty That I Killed That Dude", and finally "Now That I've Dug Him Up I Changed My Mind, I'll Just Set Him On Fire".

All goals will be changed to timed escort missions that involve navigating an area jam-packed with explosives and fragile items that will end the mission in failure if anyone shoots them.

Rewards range from being de-kidneyed to an enormous golden nugget that will immediately overburden and kill you.

Alter Ego
You could say this was the Citizen Kane of adventure games if you wanted to live the rest of your days without being trusted by anyone ever again. 2/10

Kane & Lynch 2: Dog Days
I'm not sure what's more surprising - the fact that this sequel was made or that anyone will be surprised by the end result. 4/10

Monday Night Combat
Way more fun than a game based on Team Fortress/Warmachine fanart has a right to be. 8/10

Scott Pilgrim Vs. The World
While the comic and movie successfully walked the fine line between creatively referential and annoying pandering, this dives into the latter while screaming "BARF!" and failing to hide the boner it sprung fantasizing about its own cleverness. 6/10