What Can You Do In Divinity: Original Sin 2?

You can heal skeleton party members by teleporting them into poison barrels. After a refreshing bath in green goop their bones will look ten years younger.

You can interact with pretty much every object in the world, no matter how fantastical or mundane. Inspect forks and forged paintings to get detailed descriptions. Find hidden stashes by levitating or burning heavy crates. Pick up everything that isn't nailed down and cram it in your pockets. 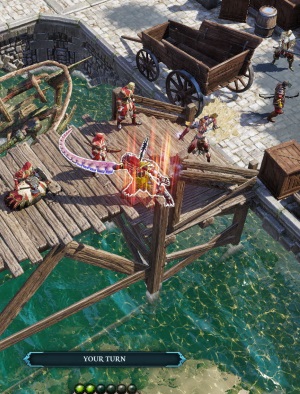 You can open up your inventory and gasp. A thousand keys? Three thousand books? Enough body parts to make twenty entire elves? Time to sell some junk.

You can talk to an NPC with one character to distract them while another party member sneaks up from behind and picks their pockets. You can feel a twinge of shame if the distracting character uses this opportunity to flirt with the NPC.

You can talk to all sorts of animals (if you have the right skill) to uncover quests, secrets, and unexpectedly touching side stories. Keep a red ball handy in case you run into a despondent dog.

You can begin a tough fight by using magic to make an enemy boss and a caged prisoner swap locations. While you mop up the most annoying underlings, the boss spends several rounds bashing at his cage's locked door.

You can spend hours perfecting your custom character, play one hour, then change your mind and restart.

You can select which instrument will take the lead in musical cues throughout your adventures. There are four to select from: The Oud and three incorrect instruments.

You can quicksave. To be fair you can do this in a lot of games. In Divinity: Original Sin 2, though, you'll find yourself quicksaving every few steps just in case one of your party members politely asks to chime in during a conversation with an important NPC then murders said NPC.

You can be a compulsive hoarder. Does an item in your inventory seem vaguely interesting? Maybe it's valuable. Maybe it's a rare item for a crafting recipe you haven't unlocked. Might as well keep it!

If someone in a quest chain is a jerk, you can resolve the quest peacefully then return and get additional XP by dropping them into a lake of fire created by your archer's explosive arrows.

You can equip a wand in one hand and a shield in the other hand. With the wand you can throw magic and with the shield you can throw the whole dang shield like Captain America, ricocheting off the faces of several bad guys.

You can be gay as hell, awkward as hell, and a wonderful combination of the two. You can kiss anyone you want right on their lips even if you don't have any lips at all.

You can give your frail party members a talent called Stench. This makes them smell terrible, which drives enemies away. In my middle school experience a bad smell actually attracts hostility so expect this to get patched out soon.

You can bend nails with a hammer to create lockpicks. Or steal lockpicks from a merchant. Or use your undead party member's skeletal finger as a lockpick with infinite uses. Or you could just buy some lockpicks. I guess.

You can lose yourself in a sprawling RPG with all the exploration, humor, strategy, sidequests, and interlocking mechanics you could possibly want.

Divinity: Original Sin 2
Larian, Obsidian, and Harebrained Schemes are in a competition to spoil fans of PC RPGs and the only loser is my free time. 10/10

Cuphead
If only this was challenging in a way that was as interesting as its art. 5/10

Mario + Rabbids: Kingdom Battle
I always said that if someone made a really great video game featuring Mario it would be popular, and it turns out I was right! 8/10

Destiny 2
Like buying a Diablo game with one act. 6/10