Sometimes a game is too busted to make fun of, its flaws so obvious that the game acts as its own observational humorist. 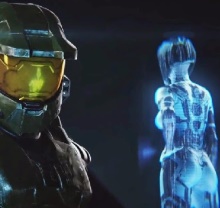 Pictured: Someone using functional software. In other words, sci-fi.

Enter Halo: The Master Chief Collection, from Microsoft (motto: "Push it out the door, these $99 Xbox Ones aren't selling") and 343 Industries, makers of Halo 4. You know, the video game that personified the question "Are you sure you care about Halo, and if so could you please tell us why?"

The game was busted at launch and is still nowhere near fixed. In fact, it's not even ready to be properly made fun of. That's why I'm taking a different, positive angle today. Let's celebrate the parts of Halo: The Master Chief Collection that actually work!

Dragon Age: Inquisition
Would have been BioWare's best modern game if it had fully programmable AI tactics, so Inquisition will just have to live with being the best BioWare game since Mass Effect 2. 9/10

Far Cry 4
I would be more critical of this busywork quasi-sequel, but the setting is novel, the bad writing isn't quite as intrusive as it is in other Ubisoft games, and these birds are such enormous assholes that it's delightful. 7/10

Escape Dead Island
Nothing will ever be good again. 1/10

Halo: The Master Chief Collection
Did I mention games are broken, and everything is terrible? 3/10

Super Smash Brothers for Wii U
Video games are great! 9/10