In a few months we'll be playing a new Metal Gear Solid. Allow me to be the first to make this observation: These games are a little weird. They're also hugely innovative, and convoluted, and clever, and very stupid. 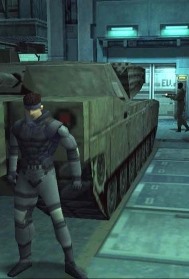 Over the years this series has rattled off so many plot twists at such a rapid pace that a map of the story would resemble the aftermath of a twisty straw explosion at the Fibonacci sequence poster factory. But even if your memory of the plot's subtleties has been blown out by the constant barrage of revelations, some moments from each game were so iconic that they can be recalled as perfectly as if you had just played them.

Borderlands: The Pre-Sequel
The same glaring flaws that weren't addressed in the second game, now with slightly worse movement and pointless oxygen management. 5/10

Sherlock Holmes: Crimes & Punishments
The closest a video game has come to making you feel like you're actually investigating a case, and the most fun I've had zooming in to stare at a video game person's neck. 9/10

Alien: Isolation
If you go above the lowest difficulty setting this wonderful tour of a lovingly realized spaceship turns into a constant reminder that the people who made Total War are still not very good at AI. 8/10

Middle-earth: Shadow of Mordor
I've never been so happy to be proven wrong. 8/10