The goal of this series is to make myself look like an idiot while figuring out the best way to get the most out of classic video game systems. Until now that has meant:

2. Mod it to run an SD card or SSD crammed with the most notable games

3. Pick up SCART cables and run everything through the Open Source Scan Converter

That's the ideal solution for most systems. But not all of them. This week we're covering the Sega Genesis. Which means we're doing something completely different, and looking at Analogue's Mega Sg. 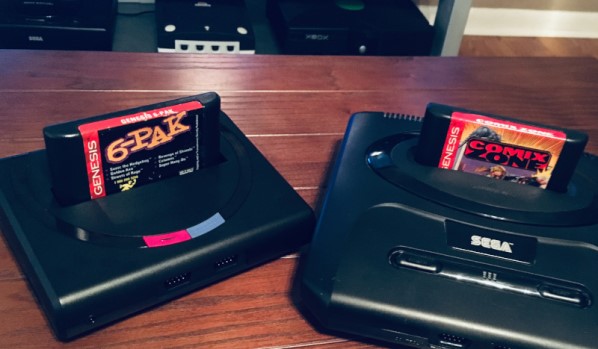 The Mega Sg is a Genesis, only better. It is 100% compatible with the Genesis and Master System libraries. It connects to the Sega CD and will eventually work with the 32x. It has a ton of modern conveniences built right into the system and easily toggled in its menus. It outputs everything crisply up to 1080p via a standard HDMI cable.

This isn't an emulation box like the Genesis Mini or SNES Classic. It's based on FPGA, or FPGAcronymforsomething. My caveman-like understanding is that while emulation well... emulates original hardware via software, an FPGA reproduces those original operations on actual hardware. The result is better compatibility and no added latency.

Before you even get your hands on the Mega Sg the box's velvet-like texture tells your fingers, "This device is far too elegant for a cretin like you."

Setup is as straightforward as it gets. Plug in the HDMI cable. Connect the power cord to an outlet or your TV's USB port (Is anyone else still amazed when their TV powers an entire console?) and off you go.

Which games should you try first? The Genesis has so many amazing titles to choose from:

I picked up a few carts from forums user Ineffiable: Comix Zone and the Genesis 6-Pak. The 6-Pak was a complete surprise. It's a Sega compilation of Sonic the Hedgehog, Revenge of Shinobi, Streets of Rage, Golden Axe, Super Hang-On, and Columns all on one cartridge. While the lack of Tommy Lasorda was disturbing, every game ran flawlessly and I had a great time revisiting a bunch of stuff I hadn't played since around 1995.

Don't have any carts? Install the jailbreak firmware and you can run every dang game right off the Mega Sg's SD card slot. While this firmware is unofficial, it's super easy to set up and perfectly stable.

Have I mentioned the menu options? Because THERE ARE SO MANY OPTIONS! You can set the Mega Sg to boot directly to the inserted/selected game when it's powered on, as God intended for all consoles. You can enable scanlines then get obsessively specific about their orientation and appearance. You can tweak sound levels, refresh rates, and even the menu's font. It wouldn't surprise me if there was an option to increase the velvetyness of the box.

Almost sounds overwhelming, right? Well it's super easy. You can pull up the menu at any time, even while playing a game, and tinker away. It took about two minutes to tweak everything exactly how I wanted.

Since the Mega Sg uses Genesis controller ports, you can plug in your old 3-button or 6-button controller. If you're fortunate enough to own the Sega Action Chair, I'd imagine that would work too.

Analogue provided me with 8BitDo's M30 2.4GHz six-button controller. This was my first time playing a 16-bit system with a wireless gamepad. It felt wrong initially - like morally wrong - but after Tommy Lasorda-ing it up for a few minutes that feeling receded and I was simply playing Genesis games with a good-ass controller. 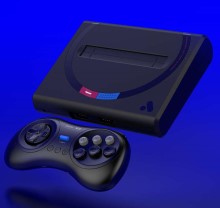 The Mega Sg is absolutely the best way to play Genesis and Master System games.

"Elegant" is one of those adjectives that makes me feel like a complete fraud, but in this case I can't think of a better word. This thing looks and feels like a boutique item, has every feature you could possibly want, and never gets in your way.

Beyond that, the Mega Sg has turned me on to FPGA systems. I had no idea this entire branch of retro gaming hardware existed. So many talented people are plugging away to preserve and revitalize classic systems, whether they're building FPGA consoles, optical drive emulators for disc-based systems, or some other amazing thing I'm too stupid to know about. And that's genuinely exciting.

After I wrap up one of these features I tend to spend a few weeks with one or two games that grabbed my attention. This time around I've set aside Phantasy Star II-IV, a series I've wanted to check out for decades. I hope there are elves and lasers!

We have a bunch of fun stuff lined up for future installments of this series. SNK's Neo Geo Arcade Stick Pro is on its way and I'll try to check out that ridiculous arcade stick shaped like the word CAPCOM if anyone will answer my emails. My original PlayStation will be modded with the PSIO flash cart. I'll tumble further down the FPGA rabbit hole with the MiSTer. And as soon as Professor Abrasive has Satiator units available I'll finally check out the Saturn.

Analogue's next project, the Pocket, will be out in 2020. It will be an FPGA-based handheld with support for the Game Boy, Game Boy Color, Game Boy Advance, Game Gear, Neo Geo Pocket, and Lynx libraries.

What, no Virtual Boy? Shameful.