The everyday threats of the modern world are lurking on every corner. Contagious diseases and pugilism are the two most common causes of death in post-9/11 America. Thankfully, Hollywood is very much prepared to make films about the big, dangerous issues of the day, which is why this week's roundup is made up of Contagion and Warrior. These are also both early contenders for this year's Academy Awards, if you care about that sort of thing.

EXPECTATIONS: Since announcing his retirement recently, Steven Soderbergh has become the filmmaking equivalent of Kiss. In the last couple years, he's directed seventeen films, three TV series, last year's World Cup and my recent trip to Las Vegas. Point is, for a guy on the verge of quitting, Soderbergh's been keeping himself plenty busy. If he can stay focused long enough to keep Contagion tense, disturbing and at least a little bit thrilling, then I expect I'll enjoy this infinitely more than most C-grade virus movies.

REALITY: For the right audience, Contagion might be a perfectly disturbing movie about the possibility of a global pandemic. As far as I can tell, that audience is mostly composed of people who could use a realistic simulation of how viruses spread, how people react to spreading illness, and how governments deal with these sorts of things. In other words, Contagion is tailor-made for high school biology classes to watch when the teacher is hungover.

As the film opens, we meet Beth (Gwyneth Paltrow), who is bringing a case of the sniffles back from a trip to Hong Kong. A couple days later, Beth has a seizure and lands in the hospital as Patient Zero of a mysterious worldwide epidemic. Her husband (Matt Damon) soon finds himself having to protect their daughter from infection, as well as from the dangers of a world slowly deteriorating thanks to the virus that quickly kills millions. Elsewhere, a freelance journalist (Jude Law) preaches online about the evil pharmaceutical companies hoarding medications, and officials at the World Health Organization (Laurence Fishburne, Kate Winslet, Marion Cotillard) race to find a cure. 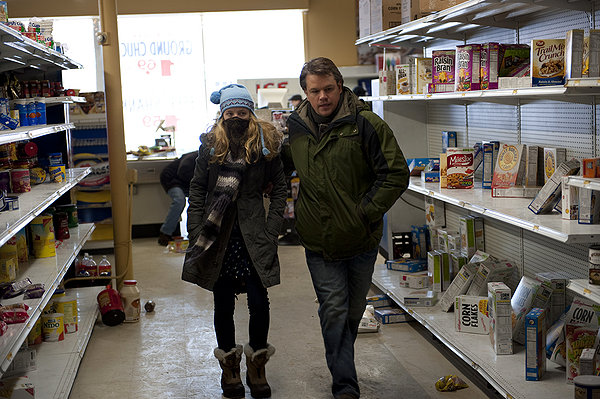 Don't forget to stock up on Stimpacks and Abraxo Cleaner while you're there.

Compared to other films of its ilk, Contagion is remarkably even-handed. It never veers too far into the outlandishly apocalyptic territory of 28 Days Later, but it also doesn't fall into the trap of simply being a boring docudrama about what viruses are and how they spread. This is a film more concerned with presenting the events of a worldwide viral outbreak as realistically (yet as cinematically) as possible. The virus quietly spreads through muffled coughs and contaminated food; scientists work diligently studying the virus and developing a cure; riots and looting slowly become everyday occurrences; Jude Law gets labeled a prophet... Okay, so the film does get a little silly in the third act, but where Contagion succeeds is in establishing these events as eerily plausible, if not downright probable.

To make up for the film's lack of insane action sequences featuring zombies or diseased animals, Soderbergh crafts much of Contagion's first hour into a sort of police procedural. The bulk of the film revolves around WHO scientists and doctors investigating the source of the disease. As a result, Gwyneth Paltrow shows up in numerous photographs and surveillance tapes as doctors try to suss out where exactly she became infected. It's established early on that she's been cheating on her husband, and that she may very well have contracted some horrifying new STD. Watching the tapes, however, paints a completely different picture. This serves as the film's central narrative thread, and it's really the only one that winds up receiving any sort of closure. 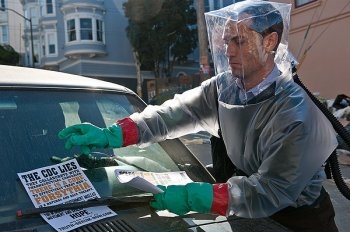 Judith insisted on wearing this on set so they just worked it into the script. Happy accidents and all that.I have to take issue with the suggestion that Contagion in any way resembles a 1970s disaster film. Aside from the apocalyptic scenario and the star-studded cast on the surface, Soderbergh's film more closely resembles a big-budget version of any number of medical procedurals currently dotting the TV landscape. What elevates the film above a decent episode of House, certainly, are Soderbergh's direction and the cast he pulls together, but this isn't some kind of grandiose spectacle about man's humility before nature. It's a movie about the volatility of relationships and the inherent dangers of living in a civilized world. This film goes out of its way to show us the ways people affect those around them, and the ripple effect this can cause, often completely independent of the virus itself. The outbreak and resulting chaos in Contagion less resembles a disaster film in the mold of The Towering Inferno and is more along the lines of The Host. The difference here is that there's no giant tadpole monster running around giving everyone Swine AIDS.


While the film definitely feels episodic at times, the direction is tight and forceful. Steven Soderbergh keeps things moving by giving us a lot of information through montages and a cold, sometimes inhuman electronic score, but he also gives his characters plenty of room to play off one another. Among the cast members there's no real standout, though stand-up comedian Demetri Martin shows up for no discernible reason as a WHO scientist. Just like in his 2009 film The Informant!, Soderbergh seems to enjoy sticking comedians in relatively serious roles. In that film, it served to inform the actual comedy. All it really does here is get the audience stirred and cause thirty people to whisper to their friends, "Hey look, that's Demetri Martin..."

If you're looking for an outbreak film where widespread panic takes hold and causes the world to collapse seemingly overnight, you may want to look elsewhere. This isn't a film concerned with action sequences or quarantine madness. In fact, it's not exactly concerned with a tight narrative, either. If, however, you're the kind of person who gets a kick out of sending a plague into your Sim City game just to watch the municipal advisors squirm, then Contagion might be the film for you. Seeing utilities and resources dry up at the hands of a global pandemic isn't the most fascinating subject for an outbreak film, but in the name of realism I suppose it serves its purpose.