It is the 9 hour mark and I am wrapping up the first area.

I have stolen (holy cow have I stolen, like, a LOT). I have snooped on private emails. I have aided someone who wanted to do the right thing for the wrong reasons. I have blasted space creatures and space robbers. I have convinced a friendly security team to run into a hail of enemy blaster fire so they would die and leave behind some sweet gear. I have recruited my favorite RPG companion since Fallout New Vegas' Cass, who happens to be the polar opposite of this person in almost every way. 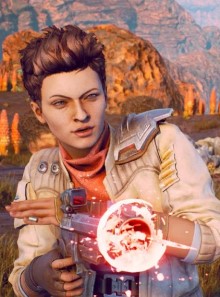 More on that "polar opposite of New Vegas" thing later.

The skill system is remarkably clever, particularly in the early game. Instead of investing in individual skills you put points into categories to raise three skills at once, like pumping the Stealth category to raise Sneak, Hack, and Lockpick. After reaching the 20 point mark each of these individual skills grants a useful bonus. For example, at 20 Lockpick you get to open level 1 locks without losing a pick. Once a skill in a category hits 50 you go from investing in categories to individual skills, at which point you need to specialize.

By frontloading all these options at a relatively low investment cost, you're encouraged to dabble in multiple weapon types, conversation options, and mechanics in the early hours while you're still trying to figure out what your character will be doing. This is a brilliant idea, even if later breakpoints 40/60/80/100 could have been more creative.

It is the 14 hour mark and my first visit to this game's space station hub is coming to an end. It seemed like every ten paces presented an entirely new circumstance, faction, store, or uniquely themed area.

I have resolved quests by persuading, fighting, bribing, exploring hidden passages, going to someone else with a better offer, sneaking, hacking, begging for a guided tour, and committing good old identity theft. I used my formidable hacking skills to free a man from a space toilet. I talked someone down from a fight just to lower their guard so I could get the advantage and fuck them up. I became very involved in someone's dating life. I had the option to let them figure it out on their own at several points, but helped because I wanted them to be happy.

My character is all about leaving combat up to companions, opening stuff real good, and talking gooder. I open almost every fight from stealth. After I take the first shot I command Parvati to teleport to my target and smash them with a technology mallet. Then I tell Ellie to teleport to the next target and unload her plasma six-shooter into their face. If anyone is still alive I activate slow motion and plink away from a safe distance. Ideally my companions finish off every enemy, since I have a perk that grants an extra 50% of XP on their kills.

It is several worlds later and I am wrapping up the game.

What I hoped for was Fallout: New Vegas with the structure of Knights of the Old Republic. Lots of tonal and theme work, characters living in a variety of situations with differing opinions on the world and its factions, all in a series of relatively dense maps instead of a sprawling open world.

John Wick Hex
Maybe you were hoping to see a John Wick Hex review here but instead here's another pointless mention of Disco Elysium, isn't that annoying? 6/10

Yooka-Laylee and the Impossible Lair
Hey, how about an out-of-context screenshot of some text that actually makes Disco Elysium seem worse than it is. 7/10

Call of Duty Modern Warfare
Hey did you hear about that white phosphorus in Call of Duty well it reminds me of this one part in Disco Elysium (lowers shades) which is a much better game, by the way. 6/10

NHL 20
The writing in this game is nowhere near Disco Elysium's, I don't know why anyone would play this hockey game. 7/10