Before we get started you should know that I have never Dungeoned a Dragon or Findered a Path. As you read this review please keep in mind that Mouse Guard is my first pen & paper RPG and I am a colossal idiot.

What Is Mouse Guard?

Mouse Guard takes place in a fantasy setting where a band of mice defend their vulnerable society from threats like armored weasels, one-eyed owls, and other mice who happen to be total jerks. You've got to watch out for the jerks every time. In my experience, they're trouble.

For the last ten years the comic book has filled the void left in my void-riddled heart by the absence of Bone. It has cute characters, evocative landscapes, and the sense that something terrible might be looming just beyond every panel. Each issue settles into this lived-in world just long enough to leave you wanting more.

Which is why an RPG that encourages you to poke around the setting with a few friends seems like a great idea.

What's In The Box

Technically, all you need to buy is the rulebook. That's it. Grab some six-sided dice and print out some character sheets, and you're set.

You can splurge a little - about the price of another role-playing system's core rulebook - and get this ridiculously indulgent box: 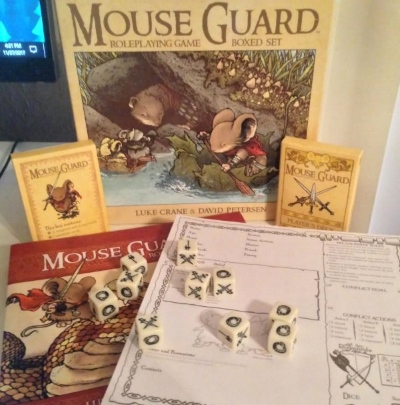 The first thing you should know about the Mouse Guard RPG boxed set is that it's slightly heavier than a neutron star. Try to lift it and you will laugh in delight as your spine snaps and your body crumples into a nondescript flesh disc in a pile of clothes. So it's worth a purchase for that experience alone.

There are so many dang things in this box! And they're all well-made, with little design touches that tie the theme together. You get four decks of illustrated cards to help players keep track of actions, weapons, and the conditions of their characters. There are several fistfuls of custom dice, a ton of character sheets, a little book full of adventure ideas, a fold-out map of Mouse Guard's world, and even an honest-to-goodness GM screen to hide your sensitive nipples behind.

Then, of course, there's that lovely 320-page rulebook.

Inviting. That's what this book is, like an oversized issue of the comic casually inviting the reader to jump in. The gorgeous presentation and artwork punctuate the text so naturally that the pages fly by. The rules and setting aren't treated as separate concepts. They're part and parcel, with the rulebook laying down mechanics as the world is built around you.

Again, I'm a complete newcomer to tabletop RPGs. I expected a bumpy learning period, but Mouse Guard's rules are presented in such a casual and fun way that I absorbed everything without feeling confused or condescended to.

I'm not experienced enough to tease out the spot where a group's dynamic ends and the RPG begins. What I can say is that the rules never got in the way, and that every part of the package prompted our imaginations in some way. My first month with the game actually managed to exceed the expectations built up in my head by years of D&D-influenced video games and role playing podcasts.

I made a fawn tenderpaw named Prombles with a yellow-green cloak. He's good at healing and brewing, which he considers one and the same. As a mouse of medicine he prefers to deal with tense situations peacefully, offering the belligerent party a drink. That rarely ends well. When he absolutely must fight he cowers behind a small shield and pokes wildly with a spear.

Prombles thought he knew it all when he joined the Guard. After his first outing revealed a world more treacherous than anything he read while growing up, he came to grips with the fact that he only knows most things. Now he has resolved to work closely with his new friends and keep them patched up. Otherwise, he may never live to locate the legendary hidden formula of the Legendary Hidden Brew. It might take years to find. He's okay with that. So am I.