Soul Wars is a massive box containing everything you could possibly need to start playing Warhammer: Age of Sigmar, aside from free time. Well, I haven't checked every compartment. It wouldn't surprise me if a packet of free time is tucked away in there. 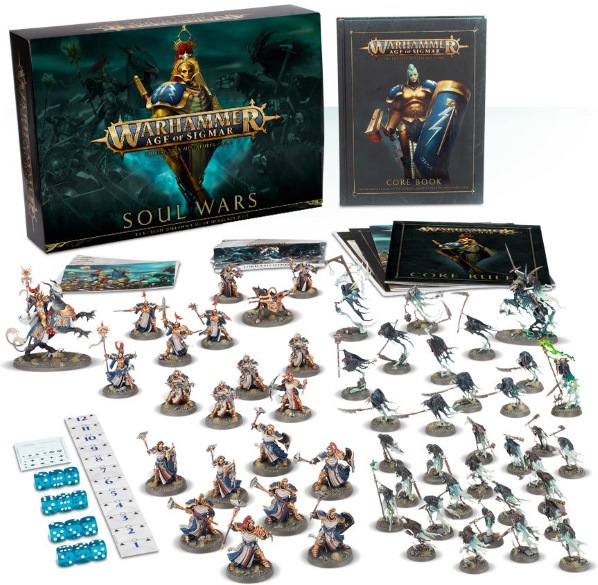 You get a total of 52 push-fit miniatures to create two armies. You get a 320-page hardcover Core Book with all the rules and lore. You get a separate softcover copy of the rules in case the Core Book is too dang heavy. You get a stack of booklets like a getting started guide, a miniature assembly guide, a novel preview, and 32 pages of background information on the included armies and one particular battle you can play. You get twelve spooky dice and a slightly less spooky ruler. You get a pair of bulging biceps by unpacking all this stuff.

After a while you start to suspect that someone at the factory held a lever too long while your box sat under the content delivery tube. There are goodies tucked away in every corner. Every corner can be lifted to reveal another layer of stuff. This box defies physics. Have you seen that movie The Cube? It's exactly like that.

This, my friends, is the Rolls Royce of angry plastic people hitting each other with magic swords.

Intermission: Look At This Boxart For Hiroki Matsukata's Super Trawling 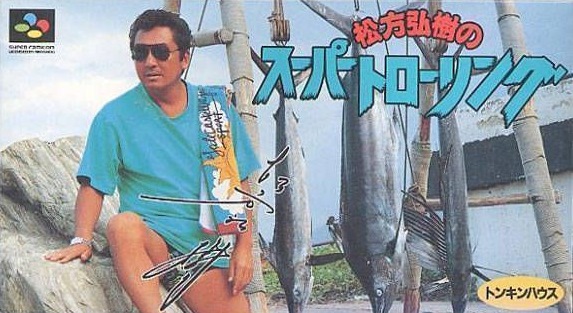 Back to the Review

Two things that drew me to wargaming: 1. Collecting miniatures. 2. Caring way too much about lore. That's why I went nearly two weeks before playing a single game, taking my sweet time assembling tiny warriors and burying my face in the included books.

The first thing you should know about the Core Book is that it has a fancy gold bookmark ribbon built right into the spine. That alone makes it too valuable to be held in my grubby hands. There's a ton of background flavor in there, painting a clear picture of the setting and factions. One army in particular, the Nighthaunt, caught my eye.

They're skeletons. They're ghosts. They're skeletons AND ghosts. You could not possibly come up with an army that is more spooky or appealing to me. The Nighthaunt also happen to be one of the two factions that come in the Soul Wars box (the other being Stormcast Eternals, the game's flagship army of massive armored warriors) so I am in luck.

The Core Book lays out a few ways to play Age of Sigmar. There's a competitive Matched Play, where opponents draw up balanced army lists with special rules and army composition restrictions. There's Narrative Play, which seems like the wargaming equivalent of an MMO Roleplay server. Then there's the super casual Open Play. This is for me.

In Open Play you basically chuck whatever miniatures you have on the table and go to town. My utterly nonsensical army is comprised of Nighthaunts, orks from Shadespire, and some dwarves I picked up because they had gyrocopters and minecarts pulled by ponies: 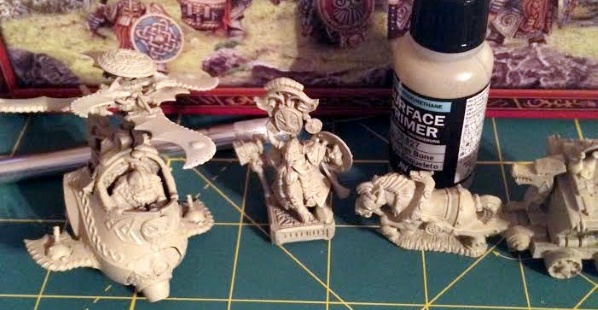 So how's the actual game? Surprisingly easy to grasp. Even after two years of covering various tabletop games with all sorts of convoluted rules, wargaming is pretty intimidating. Turns out, it's all pretty intuitive. The rules are relatively brief and straightforward. Once you know how to move units around and grasp the basics of resolving combat things move quickly. In fact, the hardest part is resisting the urge to bellow tiny battlecries.

While I've only played three battles with relatively small armies, I came away from each one eager to play again. You fight, learn from your mistakes (theoretically, at least, as I never learn from mine), and convince yourself that buying a box of rat men will be the secret to victory.

Games Workshop also sent along a pair of Battletomes, army books that provide a ton of information about the Nighthaunt and Stormcast Eternals.

While I haven't played enough to grasp even a little bit of the strategic choices laid out in these books, I have been getting a lot of use out of them. There's a ton of the faction-specific ~lore~ I crave. There are painting tutorials and suggested color schemes, which are immensely helpful for absolute beginners like me. There are even writeups and images of every unit in each army, including oversized heroic characters like this guy: 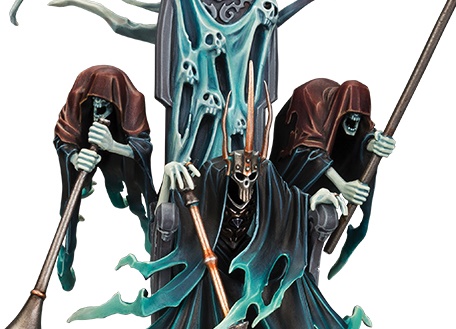 Ha ha ha I'm going to go broke! If I'm not in a debtor's prison a few months from now I'll check back in with an Age of Sigmar progress report. My army will be bigger. There will be pictures of my poorly painted miniatures for you to laugh at. I might even have some halfway insightful things to say about the game's mechanics.

Okay, that last one is probably too much to hope for.