Worst Possible Uses For The Wii U GamePad

I know that there will be a few weeks of novelty, where the hardware design will be entertaining enough to fiddle around with. I'll get one or two fantastic first party games each year, and be surprised by a handful of third party titles over the system's lifespan. That's about it. And I'm more than fine with that. I've genuinely enjoyed every Nintendo system, and I'm looking forward to the Wii U. 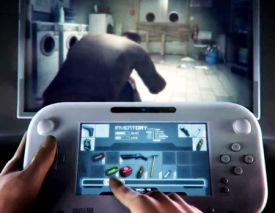 The biggest quirk this time around is the Wii U GamePad. A cross between a tablet, a controller, and a coffee table, the GamePad has all sorts of potentially interesting uses. Its screen might display your inventory, be used as a camera in something like Dead Rising, give you a detailed view of in-game books and journal entries, or become an interactive map with player-created labels.

Of course, it could also be used in the worst imaginable ways. As the Wii proved with its motion controller remote, there will always be developers who are exceptionally gifted at taking a unique control scheme and using it to create actions that no human being could possibly enjoy.

If things go terribly wrong with the Wii U GamePad, these are some of the most likely reasons.

Call a timeout, telling all of your players to get into a huddle. Now use the screen to lovingly examine the scalp of every athlete on your team. Tap the screen to increase the zoom level as you pick through each hair follicle. Eat any ticks and grubs that you come across. Now your team is ready for the big game!

After the trashy, sexist misfire that was Other M, the series attempts a return to its former glory with Retro Studios at the helm. The game is in first person, with an even greater emphasis on exploration and the creeping sense of loneliness and dread. The screen replicates the inside of Samus' visor once again. Beads of condensation form, and in the right light you can just make out the reflection of her face. In an effort to incorporate the Wii U GamePad, Rare decides on a controversial idea: Fog the visor up, and let the player clean it by rubbing the appropriate spot on the touch screen. A seemingly novel bit of interaction becomes an ordeal when Samus' helmet fogs up every minute.

The Wii U GamePad becomes an interactive map, made up of hundreds of individual nodes. This map does not represent the game's geography, but every point at which the story was trite, meaningless drivel that took itself far too seriously.

When the map is hidden, the GamePad screen shows a close-up of Desmond's face. He will stare straight ahead, slack-jawed and utterly still. His open eyes will rapidly dilate and go back to normal, seeming to stare through your soul.

You never thought it would be possible, but it's finally here. Thanks to the unprecedented amount of precision afforded by the Wii U GamePad, you can use the touchscreen to manually control Mario's descent into a warp pipe. Move him down and up to your heart's content. Players can spend more than half an hour sliding Mario down until the top of his head is barely showing, then sliding him back up and repeating the process. Mario will never be the same.

Swipe your fingers across the touch screen in the correct pattern. Tilt the controller in the appropriate place, then shake it. Hold it up in front of your eyes and wait. There. You have just completed the most accurate simulation of a pregnancy test in video game history.

At any point in the game, you can look down at the GamePad to see the action rendered on screen in the style of the classic Philips CD-i Zelda games. If that wasn't enough, you can swipe the screen to read every low effort joke that a games writer has made at the expense of the Phillips CD-i Zelda games. From here, you can pinch to find out if acknowledging a low effort joke actually counts as comedy. Then, you can tap the screen to go to Web MD and find out why my brain can't escape this nonsensical rabbit hole please help

Dance Central 3
The one thing that you probably like on Kinect is here, again, for a third year in a row, and this time it didn't call ahead before showing up with a bag of laundry and crashing on your couch. 7/10

Mugen Souls
Sometimes a game has so many weird layers that you feel compelled to figure them all out, and sometimes Mugen Souls is terrible garbage. 4/10