The World's Most Sarcastic Hero Visits An Item Shop

Strutting into the cozy shop, the hero flashed an insincere smile and sighed. He shook his head while surveying the shelves that had been meticulously stocked. Gingerly plucking one item up with two fingers as if it was a poison-covered bugbear turd, he turned to the shopkeeper.

"A potion. A health potion. GREAT. When I'm horribly injured and require instant healing, the first thing I want is to chug a gallon of unnaturally red liquid from a glass bottle. Is it possible that glass isn't the ideal material for a container that will be held close to my body in a chaotic fight? With all those spells and swords and maces flying around? Nah. Surely not. Glass is probably perfect for that. Brilliant."

Setting the item back down, the hero brushed his hands, then pointed at another object. 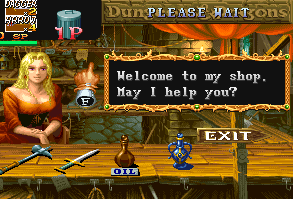 "Armor. Awesome. No, really. Fantastic. I'm sure this rigid suit of iron is going to fit my body perfectly. No need to have it custom fitted. When fighters need protection they just grab any old thing and know it will be great. Totally great. Not uncomfortable at all. Sheesh."

The hero picked up something else, his eyes rolling more skillfully than any master sarcasm master had ever rolled their eyes before.

"A scroll? With a single magic spell on it? That's probably worth every coin. I, for one, see a whole lot of use in an item that disappears as soon as you use it. As everyone knows, casting a single spell one time will always completely turn the tide of a battle. Why in the world would anyone want to buy a book full of spells that last forever? Seems like a waste, compared to the incredible value of single-use scrolls! Yup!"

Making sure that the shopkeeper was looking directly at him, the hero slowly began moving his hand in the air, fingers pinched as though holding a pen. These are the words that he spelled:

He capped off the pantomime by raising his middle fingers and scrunching his face up as though he was having an orgasm and passing gas at the same time.

The hero regarded another item on a shelf.

"A sword! How original! Never seen one of those before!"

Now the hero laid down on his back, rocking from side to side and kicking his arms and legs like a fussy infant. His face turned red and tears rolled down his cheeks, but his voice remained even as he gestured toward another shelf.

"UGGGGH! A stack of 99 arrows! That's the stuff! Doesn't take up any more space than a single arrow! Doesn't weigh any more, either! I'm sure that I won't be distracted during a big fight, thinking about what that stack of arrows implies about the nature of the universe itself!"

As the hero walked out of the store, he pointed to one last object and remarked upon it without turning around or slowing down.

"Oh, an entire side of ham. Awesome. Everyone knows that the finest place to buy a ham is in a store that keeps it uncovered, sitting next to enchanted poison daggers and town portal stones. I bet it's sanitary. More, I bet it's REAL fresh and delicious."

The shopkeeper sat in silence as the door closed, blinking in disbelief. With a puzzled frown she set about tidying the store once more, each and every shelf filled with packets of plant seeds and nothing else.

FTL
As you prepare to warp from an encounter with a vastly superior ship whose crew has beamed onto your vessel, you open a hatch to the void of space in order to put out a raging fire, accidentally asphyxiating your captain, and laugh appreciatively at every moment of the resulting chaos. 9/10

NHL 13
Ice to see you, I'm afraid my condition has left me cold to your please of mercy, cool party, if revenge is a dish best served cold then put on your Sunday finest, allow me to break the ice. 7/10

Way Of The Samurai 4
Instead of refining the gameplay systems that make up the majority of the experience, SUPER WACKINESS is amplified by a factor of ten even though it is tone deaf. 5/10

Tekken Tag Tournament 2
Will video games ever stop using the afro as a puzzling and supposedly self-evident joke? 7/10