Oh man, you just messed with the wrong Bandit. That's right. With a capital "B" cause I'm very badass. I'm about to tear your guts out and -

Your sword went right through my brainpan! How did that even happen?

Yeah, you go ahead and loot my body. I think I've got a few coins and some mammoth snouts in my pockets. You know, the usual. Go ahead and take it all. Know this, however: I will return. When you least expect it, a bandit will attack, and that bandit will be me. Your misadventures will soon come to an end at the hands of the true master of Skyrim! 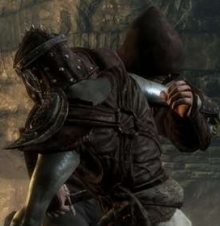 Hey, you! If you want to cross the bridge you have to pay the toll. It's uh... 200 coins? Yeah. 200 coins. Sure, I'm with the government. It's none of your business why it says Bandit above my head.

Listen, don't try my patience. You have armor made from the bones of dragons you've personally killed. Your sword was forged by the greatest blacksmith in the land. I, however, would surely prevail because I am adorned in fur armor. That's right, fur. Some if it's from a dog, and some of it's from a goat that got away before I could finish crafting. My weapon of choice is a rusty dagger that you pass up while scrounging for loot.

No? You're not paying the toll? Fine. I'm going to enjoy seeing your guts fall out of -

UH! You yelled at me so hard I flew off the cliff!

Now I'm a vampire bandit. This is so sweet. I've got a nice little hidden cave. I've got my coffin, a book of riddles, and all the broken urns I could possibly need.

Did I just hear something? Could have sworn someone was sneaking around. And there, that sounds like an arrow being drawn. When did this awesome cave start making such weird sounds?

Just in case someone's in here, I should go next to this bright fire and crouch. That will make me invisib -

UH! Didn't even see that one. Wait, was that a 30x damage multiplier? Come on. That's just stupid.

Well, well. Look who stumbled across my awesome crumbling fort? That's right, asshole. It's me again, and this time I'm a cultist bandit.

Well, my cult is very ancient and very powerful. There are all sorts of books written about us. You might have come across some of them, stolen them, then tried to manually drop them on your bookshelf before you realized it had an auto-sort feature. Funny thing is, our cult disappeared long ago and everyone agreed it was quite mysterious. Now we're back, and you've got to die.

You'll be so much easier to steal from when you're dea-

Saints Row The Third
Dumb in all the best ways imaginable and fueled by an impressionistic plot full of characters that are all too happy to dive headfirst into terrible plans, this makes every other game that aspires to be "over the top" seem devoid of creativity and ambition. 9/10

Need For Speed: The Run
Halfway decent driving, flashy but hollow on-foot quick time events, and not a lot of reason to care about either element. 5/10

Blackwater
Wait, rather than hiding in shame, these assholes assume that their brand is popular enough to warrant a piece of entertainment? 2/10

Jurassic Park: The Game
Imagine a version of Heavy Rain that actually had some charm, then stuttered at every turn and made your inputs feel more disconnected from the game than the gap between David Cage and the notion of good writing. 6/10

The Legend Of Zelda: Skyward Sword
Carry on my skyward sword / the tutorials might make you bored / lay your worries to rest / don't you waggle no more. 9/10