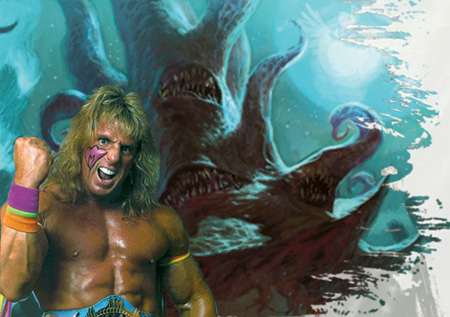 WTF, D&D!? has not held an annual contest since August of 2011, but in strange aeons, even the death of contests may die. Here is the short and sweet of it: we are holding a contest inviting people to create artwork for Call of Cthulhu set in the 1990s. If you are short on ideas you are encouraged to illustrate a scene from one of the past adventures of Kurt Cobain, Eazy-E, Lisa "Left Eye" Lopes, and Station or use the Lollapaloozicon random hook generator to give you a 1990s Cthulhu scenario. Or create a cover for the imaginary module Hard Ticket to Baghdad. Enter as many times as you like! The best of the artwork will be used in an upcoming play-through of this imaginary module. Your artwork should be no smaller than 650 pixels wide by 400 tall. You must submit them to Zack with the subject line CONTEST no later than May 1st, 2014. The grand prize is a $100 Amazon gift card. Second place is a $50 card and third is $25.

Zack:: Oh man, we were just going to come here to plug the Hard Ticket to Baghdad art contest, but then Ultimate Warrior died and I'm not really feeling too much like talking about contests.

Zack:: Probably when he threatened to sue Something Awful because I made fun of his terrible website and crazy views.

Steve: Huh. Well I've got to go with when he joind WCW and teamed up with the red-faced Crow version of Sting and they had a rivalry with Hulk Hogan and the Harts that came to a head at Halloween Havoc 1998 when Bret Hart put an unconcious Sting in the Sharpshooter and the Warrior sort of wrestled Hulk Hogan in the worst match I have ever seen.

Steve: Yes, dude. They spent weeks building it up and then Horace hit Ultimate Warrior in the head with a chair after a couple minutes of really bad basic wrestling moves and Hogan pinned him.

Zack:: I prefer to remember him as he was in his heyday: melting the face off Mean Gene with his intensity.

Steve: It was pretty awesome when he did that on Arsenio.

Zack:: I have a suggestion here, Steve. The wound is fresh, so it might be hard to consider, but since our contest is to create 1990s Call of Cthulhu artwork, I want to extend it to the WCW/WWF rift.

Zack:: I want Ultimate Warrior versus Azathoth. I want Macho Man fighting a Gug. I want to see Diamond Dallas Page dropping a Diamond Cutter on a Hound of Tindalos coming out of the corner of the squared circle. I want Stone Cold opening a can of whoopass on a Shoggoth.

Steve: It's not too soon though man?

Zack:: It's almost too late! We should have been doing Ultimate Warrior/Cthulhu crossover fan art before he died.

Steve: So you could win a $100 Amazon gift card just for capturing the beauty of a world famous superstar wrestler like Glacier or Papa Shango fighting a backwoods cult of Shub-Niggurath.

Zack:: You have all of April to get your entries in! Send them to me with the subject line CONTEST.

Zack:: There is another angel in heaven today and he's screaming to God about Warrior Nation.