While Weekend Web probably isn't ever worksafe or even mindsafe, page 6 of this edition really isn't worksafe. You've been warned!

First things first, I am 100% anti-circumcision. I don't see the point, and if it wasn't generally performed when we are babies, few guys would ever choose to get the procedure done in adulthood.

But hey, it happened. You're part of whatever insane sequence of events that occurred during the course of human history to bring such a barbaric act into existence. And let's be honest with ourselves here, you have no idea what you're missing, foreskins are the ugliest things on the planet, and no, you didn't remember the procedure as an infant. Guys who claim they did also remember a whole bunch of other shit that never happened. They are insane.

And that pretty much describes the whole foreskin "intactivist" movement. The Foreskin-Restoration and Intactivist Network is where they congregate, sharing tugging tips, dick pics, support, and a healthy dose of crazy.

RON PAUL/FORESKIN RESTORATION IN '08!!! Yeah, YouTube is a great place to watch videos of jerkoffs falling off their skateboards and all but not so much for activism, especially something as stupid as foreskin restoration. 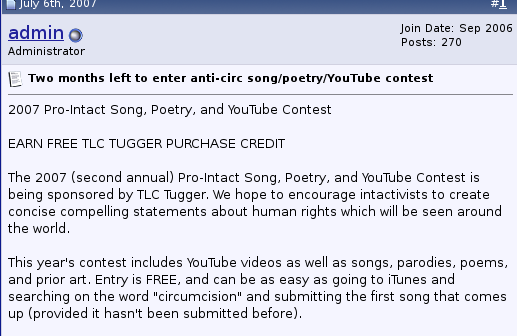 Even the foreskin restoration forum has drama and controversy.

I not only tug in front of the TV, but I tug in the club, at the movies, where ever life takes me, my tugger is always along for the ride. It's like my new best friend.

Luckily the guy couldn't figure out how to attach that picture to his post and spared us the sight of his "tight pucker".