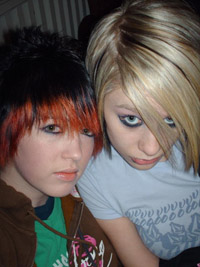 Just look at these dorks.Identification Jesus Christ, kids these days are such amazingly stupid little pieces of trash. It used to be that dressing up like a weirdo hipster entailed some kind of risk: you’d get called a queer at school, you’d get laughed at at the mall, and your dad would tell you to get a haircut and wipe that makeup off your face (whether you were a boy or a girl). Nowadays, hipsterism is the new normalcy, and these little sons of bitches are dressing up like ugly little bastardizations of styles worn by daring morons ten and twenty years ago. It used to warm my heart a little to walk down the street and see a really flamboyant goth or a really nutso punk, because that took a little bit of panache. So what if they looked like idiots: they were willing to face the fact that they looked like idiots with their heads held high and a “fuck you” attitude. Sure, we’d all laugh at them, but at least we could respect the fact that it took a modicum of misguided guts to earn our laughter. I’m not even complaining about shit like Hot Topic that co-opts, repackages, and shits out obsolete rebellion. The Hot Topic era is over. Now you can get co-opted, repackaged rebellion at J.C. goddamn Penney.

It was okay to see a stupid-looking goth around town once in a while. Now I see stupid-looking pseudo-emo-goth-hipster-cheerleader-hick pieces of shit left and right. The same kind of uncreative sludge that would have been listening to The Goo Goo Dolls a decade ago has decided to grab the arty-looking-kid baton, once the property of misfits, outcasts, and creative individuals, and just fucking run with it.

Musical Taste: And can you believe what these assholes are listening to? Avenged Sevenfold? My Chemical Romance? Now they’ve got plenty of this bland, diluted pap music to go along with their bland, diluted pap outfits. If your little brother or sister listens to this shit, punch him or her swiftly and directly in the nose and then take the little shit directly to the record store.

You know how they used to have those books for Christian parents where for every conceivable band in the universe they provide a Christian alternative that sounds kind of similar but promotes the love of Jesus? They need to have one of those things, but for big brothers and sisters. It needs to list every shitty post-hardcore fucking Hawthorne Heights travesty that is being marketed to our children as cutting-edge (have you fucking seen those Hawthorne Heights commercials on MTV2? “Pop music is dead… we demand REAL music,” or some shit like that. In reference to Haw-fucking-thorne fucking-heights-fucking). For each of those bands, this book needs to list a similar alternative that isn’t absolutely worthless, retarded trash. I swear to god, it would sell a million copies.

Hey, by the way, look at this shit. This is what kids are listening to. This band is, on their website, pandering for goddamn TRL votes. 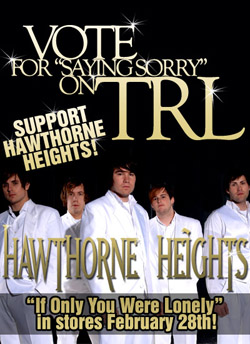 First of all, let me say that I am not a homophobe. Second of all, I think the revulsion people have about “selling out” is ridiculous. But that is the single gayest thing I have ever seen in my entire lifetime.

How to Tame a Kid These Days: In the service of religious persecution, torturing someone until they renounce their faith is deplorable. But in the service of preventing your son, daughter, brother or sister from turning into a trashy little pansy whore, I fully advocate tying kids to a chair and verbally abusing them until they understand exactly why the music they’re listening to is a gigantic, majestic blimp full of poop. Buy some books about the history of rock. Read aloud. Play sample songs at relevant intervals. Throw a bucket of icy water on them if they start to complain or doze off. Keep it up until the little cretin is cured. He or she will thank you for it later.

Benefits of Friendship: You can slap some fucking sense into him or her.

Okay, got that off my chest. If you have any questions or comments, or if you need me to personally e-mail you idiot little brother or sister and set them straight about the music they listen to, e-mail me at davidthorpe@somethingawful.com. Goodnight!