FURRY!, submitted by Jori. Furry webcomics seem to compose roughly 30% of the Internet. There are comics that range from furry drama epics, to scifi adventure stories, and your usual slightly droll unfunny serials with poorly drawn characters. FURRY! is sort of a compilation of the shit you see in most furry fetishes all in one extremely boring comic. It's not horribly drawn or graphic - it's not even very sexual - but it includes a plot related version of nearly every furry fetish from "macro/micro" to "vore" to "inflation" and everything in between. 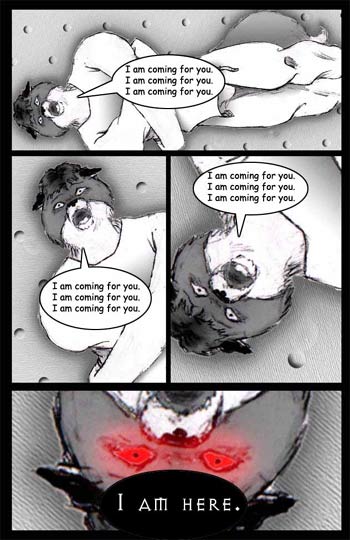 Gorgon mmmmmmms, then looks down at the suffering below, and gives them a mock-pity grimace. "Poor insects, are you suffering? Shall I end your suffering now?" He decides to do so by bringing his legs together, rubbing them against each other briskly. Perhaps this is an act of mercy. If so, it is still as cruel as any other acts he has performed, and soon there is nothing left by a gelatinous mess that oozes down his legs as he stands up. With a few thunderous stomps the few survivors are smashed into oblivion, and the area falls silent, save for the agonized panting of the one little pet kept on the minotaur's shoulder.

The comic is extremely long, which should come as no surprise since furries have a tendency to devote their entire lives to their fetish in one way or another. It also makes no sense most of the time, which is another hallmark of the furry nutballs which have infested the Interweb like Nimda strapped to Klez. I've said it before and I'll say it again, furries are trying to become the "gays of 21st century", but no matter how much childhood trauma and molestation by animatronic purple gorillas they have experienced this shit will never be as socially acceptable as homosexuality. It's a dumbass fetish embraced by social outcasts so that they can be a part of something other than an Everquest guild and AAA car service.