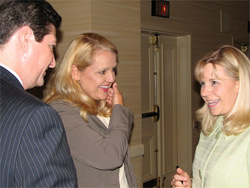 My cousin, his wife Hubbard, and Liz at a 2007 fundraiser for Fred Thompson.Contrary to the title of this article, I did not date Liz Cheney, but this isn't my story. This is the story of my cousin, Bert, who dated Liz Cheney for two months in 1990 and who has been her friend ever since. He is half a step away from having her cell phone number and she calls him on a secure line, just to chat, two or three times a month. Last year he wintered with the Cheney-Perry family for a week at the Cheney family island near the Turks and Caicos. Don't bother looking for it on Google Earth, it's not there, but Bert said that when he took the helicopter there it was closest to an island "shaped like a banjo."

Bert met Liz at a Foggy Bottom summer picnic in 1989. They were both in college still and working warm-up jobs in DC. Those were heady times to be a college Republican. The Reagan pictures were still hanging in all the police stations and libraries, Dick was SecDef, and it was early days for Bush Senior. Bert was with the young republicans and working in Denny Hastert's office as a summer intern. 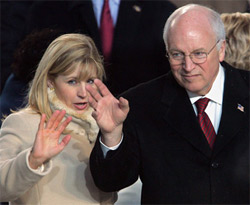 Rarely seen apart in DC or elsewhere.Even back then Liz was hooked up in one of those jobs specifically designed to burnish the resume of a protege or family member, the sort of job that sounded impressive, came with a car and a USA credit card, but was really just a chance to network. If you can't hack it in the big show you can go work for a think tank writing white papers about leftist Burmese guerrilla groups and how babies in Tongo are catching AIDS from the drinking water. That was Bert, Liz was bound for better things.

Bert told me Liz was quite drunk at the party and really hitting on Dick Armitage, laughing at all of his golf jokes and hanging on his arm, which is weird because back then everyone called Armitage "Baby Dick," as in he was a baby version of Dick Cheney and, if DC madams are to be trusted, because he had a baby-sized wiener. Bert peeled Liz off her daddy stand-in and held her hair while she spewed chardonnay into a potted ficus. Not one of her finer moments, but it was the start of a friendship with Bert that heated up to romance during the spring of 1990.

Bert has told me dozens of stories about the Cheney family, many of which I am sworn to secrecy on, but Bert has authorized me to share the following.

You might think the Cheney family would carefully guard all these secrets, but they don't. They figure anything bad enough to be damaging would either also damage the person telling it or would be too strange to be believed. I don't know about that, but when Bert tells his stories I tend to believe them.

Even though Bert is still in touch with Liz, he has moved on politically from the Republicans and considers himself a true libertarian. The last time I spoke with him he was considering running for Sheriff so that he could fire all the cops. Liz Cheney is currently a policy analyst, critic of the current President, part of the Draft Liz Cheney for 2012 movement, and author of the Liz Cheney/Predator Drone 2012 campaign platform.