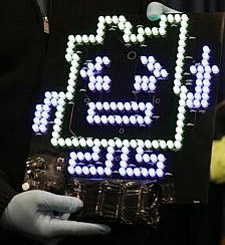 Please stay vigilant and keep an eye out for other potential bombs such as computer motherboards, books, strollers and buildings.The Cartoon Network recently made the curious decision to advertise Aqua Teen Hunger Force by placing terrorist bombs across many vital U.S. cities and Boston. Luckily their senseless marketing scheme was foiled by fast-acting officials who miraculously located and defused the brightly glowing devices (cleverly designed to not resemble bombs in any conceivable way) before any harm could be done, but obviously things could have been much worse. They could have been advertising The Boondocks.

We may never understand the Cartoon Network's reasons for these attempted attacks. We may also never understand the reasons behind Adult Swim's increasingly annoying commercial break bumper cards, which make me want to punch progress in the face for making us live in a day and age where some jerks get paid a lot more money than me to write those horrible things while posturing as the epitome of all that is ironic and cool instead of cowering in a vast and uncaring wilderness while being hunted by sabretooth tigers. What we can understand is that bombs are not an effective marketing tool, and that maybe we should have someone write that down in case we forget.

While this fiasco was the country's biggest news story for a few days straight, what happened was not really all that unusual. As long as advertising has existed, companies have been going a little too far to promote their products, sometimes with catastrophic results. 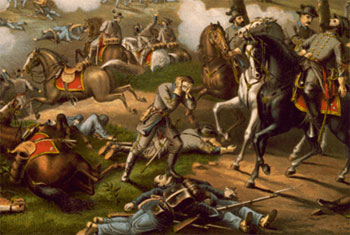 Gee-Fizz: A civil beverage for civil men.The year was 1863, and Gee-Fizz Cola had a problem. Their newly-developed soft drink was far superior to the competition's products, but the Civil War was in full swing, rendering the task of reaching a large customer base with a standard ad campaign virtually impossible. What they needed was some way to bring Gee-Fizz directly to the troops.

The company sunk most of its research & development funds into a musket that, when fired, extended a metallic pole out of its barrel from which a small banner that read "Drink Gee-Fizz!" flapped proudly. Gee-Fizz Cola produced three hundred such muskets, and on April 27th they hired three hundred actors to dress in replica Confederate army uniforms and wield the clever advertising contraptions.

The plan? To sneak up on the 133,868 members of the Union army stationed in Chancellorsville, Virginia and surprise them with the satisfying flavor of Gee-Fizz cola.

What followed was a disaster.

The Confederate-costumed actors charged the Union army while brandishing their advertisement muskets, and defeated them handily after less than three hours of brutal combat. Only twelve actors were injured, three of whom simply had dirt in their eyes and felt better after a good cry. The Union, on the other hand, suffered 16,839 casualties.

Emboldened by their victory, the actors made a push westward, winning key battles in San Diego, the Pacific Ocean, and a rather surprised Japan.

None who saw the advertisements for Gee-Fizz Cola lived long enough to purchase a bottle, and the company soon went under.

Business was not going well. The clown had paid to be featured first in the Yellow Pages, bought ad space on dozens of park benches and plastered fliers on every surface in the city that had an inch of free space. Fat lot of good it did. His last gig was a birthday party three weeks ago, and it had turned into a total disaster when one of the kids asked for a porcupine balloon animal. That was one family that wouldn't be referring his services to their friends.

If things didn't turn around quick, he'd be forced to give up on his lifelong dream and get a normal job as a mime.

"Come on," he thought while sitting on his front porch, drinking his morning coffee as a school bus slowly rolled by. "What you need is something to set yourself apart from the other clowns. What you need, John Wayne Gacy, is a gimmick."

To promote its 31st year in business, Baskin-Robbins' central offices held 31 people hostage during a tense two day long standoff with police. Every hour on the hour, one hostage was executed and unceremoniously dumped out of an office window to celebrate one of their 31 flavors of ice cream.

Finding itself in a losing battle against domestic competitors such as Chevy as well as red-hot Japanese companies, Ford was desperate to pick up sales in the mid 1990's. Their solution was the "Test Drive Drive Test" event, in which customers were invited to drive both a Ford Taurus and a Stealth bomber complete with live nuclear warheads.

Ford hoped to illustrate how comparatively easy and relaxing it was to drive a Taurus and sell a few cars in the process. What they got, however, was destruction on an unfathomable scale.

Excited about the launch of their Air Jordan line of sneakers, Nike organized the mother of all contests.

One lucky winner would attend the NBA All-Star Game, get a lifetime supply of Air Jordan sneakers, have a city named after them, and meet Michael Jordan for a one-on-one knife fight.

On his way to meet the winner, Michael Jordan was shot and killed for his Air Jordans.