Vampira the First, submitted by Me. There can be no gussying it up this time. There can be no pussyfooting around this issue. This site is what's wrong with the internet. I'm an optimist, perhaps a foolish one. I believe that a human being, given the opportunity and the forum to express him or herself freely, will either do so in a relatively intelligent and reasonable manner or decline the opportunity altogether. That, of course, is not the case. As it turns out, given the opportunity and the forum to express him or herself freely, a human being will, in fact, rant about absolutely anything, no matter how pathetically retarded, blatantly stupid, or obviously ignorant. In fact, people will pay money for the chance to do so. What's even more amazing - and I realize that I'm stating the obvious, here, but I need to get it out of my system - people will waste the time to express themselves even when they have nothing at all to say. It's bad enough to throw some moronic, fuckwit opinion out there into the great field of the internet. But why would you even possibly spend the time it takes to design a website if you have nothing of any value, not even to the most easily amused idiots, to say, especially if you are astoundingly bad at web design? And why, God, why would you ever make this? ANSWER ME THAT, JESUS? This site is devoid of any useful information, but I've looked at pointless sites before. This site is horribly designed, but I've looked at horribly designed web pages before. This site is on Geocities, which is like a homing beacon to the most vicious, snarling 'tards the internet has to offer, but I've looked at Geocities sites before. This is all of those things, and yet, the whole is somehow a thousand times worse than the sum of its parts. 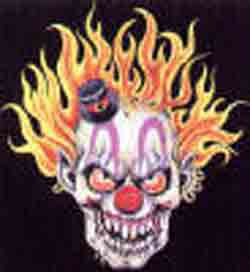 This site is not complex. I will actually list the items on the page, from top to bottom, as they appear. I feel that if I do so, it may in some way loosen the piercing talons this site is using to clutch the most tender parts of my brain. First is a giant downwards scrolling black and red banner that says, "Welcome." The banner, like all of the other images on the site, is both stolen and meant to be shown at a much smaller size. It is blown up to the point of looking about as good as any of the graphics in the original "Wolfenstein." Right below that are buttons to view or sign the guestbook. It's like the owner of the site is saying, "believe me, it doesn't get any better from here. Save yourself the pain and sign the guestbook now." For those brave enough to travel onwards, which is EVERYONE, because the images on this site are crammed together so as to justify the horrible empty space on the right side of the page that only accents how the tiled background doesn't fit correctly, there is a clown skull image. The clown might have some sort of object stuck in its head, but I can't tell for sure, because the picture has been magnified too much to make any sense of it. Next to that is an animated gif of the Taco Bell dog thrusting into what looks like some Taco Bell paper, although it could be a tube of toothpaste. My eyes are too crippled by this site to make any sense of shapes and colors anymore. Then we have a cartoon of Santa Claus lying on a therapist couch, fantasizing about a reindeer's horribly drawn asshole. Hey, that's great. Hope you like that winner, because it's on the site twice.

Then we have the obligatory counter (it's mercifully low. Do yourselves a favor and don't change that), followed by a block of text, in HUGE FUCKING FONT, and underlined, in front of a red square, so it stands out all nice and horrific-like, reading "Friends pics! I'll get some more soon)". I took a look through the pictures of her friends. I'm not going to pass judgment on them from appearance alone, not even on Raggedy Bloat or Uglywisp, but I will say that I've encountered many sites before, as I'm sure you all have, that show pictures of the site owner's friends. Usually, they are accompanied by text giving names, or some info on the context of the picture. Not so, here. I guess the site could be dedicated from to her friends. That's one interpretation of the text at the top of the window, "They may be weird, but they're all mine ( to my odd but kuul friends)". Another possible explanation is that Vampira is just trying to prove that yes, she does actually have some friends. In any case, there is no reason given for the existence of the pictures, nor is there an excuse given for the stupendously poor quality of the majority of the pictures. Back to the main site, we have a link, which is in even larger letters and says, and (God help me) I quote: "I LOVE CLOWNS!" The link, of course, is to a few pages of horribly magnified, pixilated images of bad horror movie clowns that are the reason that the rest of us hate clowns. Woohoo, Vampira, you like to like things that normal, sane people don't. Good for you. Go raise Snackwell's stock another few points.

Now, just in case the phrase "I LOVE CLOWNS" and the link to pages of clown pictures doesn't drive home the fact that this person has a thing for clowns, we get a clown picture! Yippee hooray! Then comes another link, also in huge text, but this time over a lovely pink box that says, "I LOVE TO LAUGH." The link goes to a few images that Vampira finds funny, including images that have already been displayed on the site. None of them are funny. Seriously, none of them. And they are all out of date and childish, to boot. Got a real winner here, folks. I'd rather splash bile in my eyes than spend more time at this site, but we're not quite done yet! There's one more text box, which reads "I LOVE WEIRD THINGS," but that doesn't link to anything. Yet. All of this is in front of a background that is nothing more than an awkwardly tiled wallpaper of... some sort of satanic image, I guess. It's basically a pentagram trying to fornicate itself, so I suppose that could be considered goth, or shocking, or some mindless attempt at pointless, undirected angst. I hate this site. I hate it in ways that I don't even fully understand. I wish pestilence and famine upon Vampira from now into perpetuity.