Wednesday, Dec 11, 2002 by Rich "Lowtax" Kyanka (@TwitterHasBannedAllMyAccountsEver)
Know of an awful site? Send it to us and become a hero!

The American Fascist Movement, submitted by mkb. Hey kids! Do you have perplexing questions about life? Does it seem like you're constantly searching for something you just can't find? Well take a deep breath and rest easy, as The American Fascist Movement is here with all the answers to life's most challenging questions! Of course, the biggest question they answer is undoubtedly, "what kind of website would a fucking idiot put up?" which only lends to their funny little fascist charm! 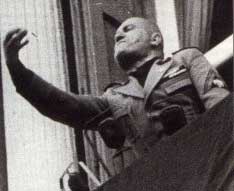 Nationalism-The AFM looks at the nation as of prime importance in every aspect of life. Every culture deserves a nation or homeland in order to secure its destiny and way of life. We will always fight for a strong country. Flag burners, criminals, and others that harm our country in any way will not be tolerated and will be punished accordingly (i.e. exile, capital punishment, jail time, or community service).

Homosexuality- Is an immoral, irrational act that defies the principles of nature, and shall not be tolerated in any shape or form. An empire CANNOT succeed without people, therefore homosexuality will be forbidden.

Corporativism and the Corporate State-Fascism solves the problem of unemployment and poverty by establishing the Corporate State. Industry will be divided into a multitude of National Corporations governed by representatives of employers, workers and consumers, operating under Fascist government. The State will not attempt to conduct industry as it would under Socialism. Instead, the State will lay down the limits within which industry may operate, and those limits will be the national welfare.

Wow! All of these ideas sound so good to me, I don't know where to start! And I am naturally not saying that because I'm afraid the American Fascists will sentence me to death if I disagree with them! I really mean it! I assume Fascist America approves of horribly animated 113k animated gifs on the frontpage of websites, which means that I'll be forced to do a complete overhaul of this site. Oh, and I thought this message that appeared on Internet Explorer upon loading their page was especially funny:

Sometimes I think that Bill Gates guy knows more than he lets on to.

PS: There is a guestbook you can sign... AND FASCIST LOWTAX COMMANDS YOU TO UNDER THE PENALTY OF DEATH!