Gordon:Oh, I just wanted to make sure this phone worked. You know, take it on its maiden voyage. Hah.

Batman:This is the third time you've called me since the phone has been installed, it's hardly a maiden voyage. Or an emergency. Which is what this line is for. 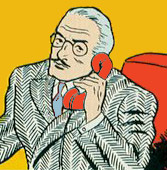 Gordon:Ah, yes. It is something though, isn't it? Being able to contact you immediately just by picking up a red phone in my office. No numbers to memorize and dial! I wish I had a phone for everyone I knew. I'd have one on my desk for my wife, one for my assistant, one for the pizza place, one for-

Batman:If there's no crisis, I really should get back to waxing the Batmobile.

Gordon:I wonder what would happen if I had a red phone for me. If I picked it up to call me, would I answer?

Gordon:Or would that create some sort of loop in the space time thingy?

Gordon:Yes, I will continue, thank you. It seems to me that a man calling himself with one of these phones could cause all sorts of trouble. We need to keep this technology from falling into the hands of our enemies, Batman.

Batman:I don't think you have to worry about that.

Gordon:Of course not, not with you protecting the city. Hey, how would you like to come over to my place tonight? I need a hand painting the guest room.

Batman:Sorry sir, I'd love to but I can't.

Batman:I'm... on the case we just discussed. Making sure that no villains call themselves.

Gordon:That can probably wait until tomorrow.

Gordon:Batman, thank goodness you answered! The Riddler used some sort of strange ray gun on me, leaving me completely paralyzed! As he was leaving I heard him say that the only way to counter the ray's effect is for you to give me a foot massage. 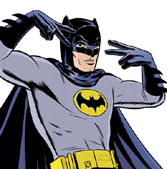 Gordon:Yes, with the scented oils and everything. It's all very disturbing. Please hurry!

Batman:There's absolutely no one around to help you, say, pick up a phone?

Batman:You're completely paralyzed, yes? All the muscles in your body, even your face and mouth?

Batman:So how is it that you're speaking to me right now?

Gordon:Don't be ridiculous, I've known how to speak since I was practically twelve years old. You've seen me speak!

Batman:You are aware that I dropped the Riddler off at Arkham Asylum no more than an hour ago, are you not?

Gordon:Good lord, he must have gotten his hands on some sort of time travel device! This is a much more dire situation than we had thought. You'd better get over here and massage my feet before he strikes again.

Batman:Doing that would be pointless if he has a time travel device, since he could simply travel to the moment after I leave your office and paralyze you again.

Gordon:Then don't leave me. Don't you ever leave me.

Batman:That would only be giving him what he wants, keeping me occupied while he wreaks havok on Gotham. I think the best course of action is to just wait this out. You stay there and I'll spring into action if he shows up anywhere else in the city.

Gordon:Could you at least send Robin?

Batman:This had better be good.

Gordon:Yes, hello! I'm looking at my phone bill and something is not quite right.

Batman:I think you're mistaken. My costume is meant to conjure up the visage of a bat, not that of a customer service representative.

Gordon:No, it's the bill for this line. I assumed that my calls to you would be local but I've been charged an outrageous sum. The bill says I've called outside the city lines to "Stately Wayne Manor" a total of three hundred times this month.

Gordon:Batman, I'm going to ask you a very straightforward question. I want you to answer me truthfully.

Batman:I won't lie to you, Gordon. Ask of me what you will and we'll take it from there.

Gordon:You heard me. Is your name Stately Wayne Manor or is it not?

Batman:No. My name is not Stately Wayne Manor.

Gordon:You're telling the truth, I can tell. I'm like a human lie detector test with a face.

Batman:So what about that bill?

Gordon:Oh, I'll just pay it. It's the taxpayers' money anyway.

Batman:No thank you, Commissioner Gordon. Is there something I can help you with? 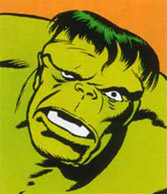 Muffled Voice: This is the, umm, pizza place. If you aren't going to place an order we'll uh... have no choice but to... no, I'm kidding.

Batman:Thank you for admitting that.

Muffled Voice: This is actually the hospital. We're calling to inform you that sadly, your parents have been hit by a, um, canoe. They didn't make it. The pizza joke was standard procedure. We try to loosen people up with humor before we tell them the bad news.

Batman:Gordon, I am going to hang up now.

Gordon:What makes you so sure it's me?

Batman:Well for one I'm the greatest detective in the world.

Batman:Then there's the fact that this phone only rings when the corresponding phone in your office is picked up.

Gordon:None of this will stand up in court. I'll see you in hell.