Wednesday, Feb 18, 2009 by Andrew "Garbage Day" Miller
Know of an awful site? Send it to us and become a hero! 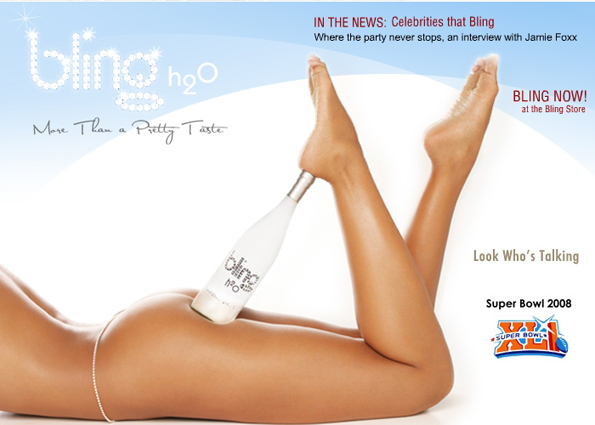 Spending a couple bucks on bottled water instead of drinking from the tap might be seen as mildly ostentatious. However, paying $40 for bottled water bedazzled with the word "Bling" qualifies as completely fucking retarded. On its Web site, Bling explains why consumers should shell out extra money for its ridiculous product: "It's couture water that makes an announcement like a Rolls Royce Phantom... Bling H20 is pop culture in a bottle." It's difficult to imagine pop culture tasting like anything but raw sewage, especially as embodied by "celebrities" such as Paris Hilton (who gives Bling to her paparrazzi and her dog) and Jamie Foxx (who endorses Bling to thank the beverage's "Hollywood writer/producer" creator Kevin G. Boyd for his hilarious contributions to Jamie Foxx Show episodes such as "I'll Do It My Dammy.com.") For the price, Bling should function as a magical elixir, so perhaps it will heal the user's cranial gashes in the likely case that someone snatches his bottle and uses it as a frosted-glass bludgeon.