The Keys to Death and Hell

Tuesday, Mar 11, 2003 by Rich "Lowtax" Kyanka (@TwitterHasBannedAllMyAccountsEver)
Know of an awful site? Send it to us and become a hero!

The Keys to Death and Hell, submitted by Dennis. Sometimes I like pretending the Internet doesn't exist. I'll wake up in the morning and jam a toothbrush down my throat so I can scrub the impure thoughts out of my head and then I'll say, "well, it's time to go back to bed again, because the Internet doesn't exist and that means I won't have to do any work today!" Then my parents will start calling me three hundred thousand million times to ask me why I'm not doing any work and if I'm alright and if I accidentally died somehow, so I'll end up having to acknowledge that the Internet still exists and people are still able to create webpages on it without requesting authorization from the proper government officials first. "The Keys to Death and Hell" is some convoluted site which combines cyberpunk with conspiracy theories, UFOs, Satanists, and werewolves, all while keeping a healthy portion of goth crap to make us all cry black eyeliner tears of remorse. To be honest, I have no clue what this site is about, but there's a fucking lot of it, and seemingly no connection between any of it. 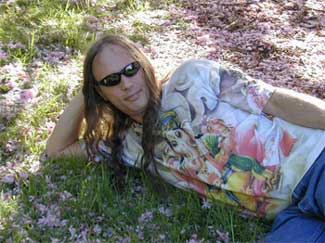 Breaking through firewalls and tampering with corporate data banks wasn't the only threat from the new aeon radicals. Non-nuclear electro-magnetic pulse devices were also used to wreak havoc on the Networks.

The cost of shielding these Networks was prohibitive. Even the possession of knowledge about such technologies was punishable by death. Microwave gapplers, random airborne and aqueous plutonium releases, synthetic viruses and processor plagues were continually eroding the stability of the Multinational Conglomerate. Along with the introduction of analogues like Dsu3, known on the street as God, were born legions of highly motivated and skillful addicts, resulting in a reign of terror extending to the addict and non-addict enclaves alike.

Around the age of five I was vacationing with my relatives south of Myrtle Beach, S.C. Late one afternoon I lost my plastic bucket and shovel (alien artifacts?) in the surf, and watched from the beach as they were swept out into the Atlantic. My mother called me "home for supper" and I remember whining to my mom about the loss of my bucket and shovel.

Yeah, that's right Ace, lost alien buckets and shovels = magic and cyberspace. I could make a flowchart detailing how all this works, but frankly I don't care about flowcharts just like I don't care about this site or its TOO GOTH TO HANDLE webmaster, who refers to himself as "infek bin Laden." Oh infek, you so crazy! I think I wanna have yo Satanic baby!

PS: Make sure to check out his "about me" page, which if I'm looking at it correctly, cannot be viewed with human eyes.