White Plume Mountain is one of the first and most famous "puzzle dungeons" released by TSR. Written by Lawrence Schick in 1980 as a job application, it was published unchanged in the days before D&D was about killing monsters and was mostly about killing the players. It became a favorite among the sort of bastard DM who ran Tomb of Horrors. Almost every room in White Plume Mountain's titular dungeon is either a trap, a monster asking a riddle, or both. Prepare to experience the adventure module voted the 9th best of all time by Dungeon magazine. 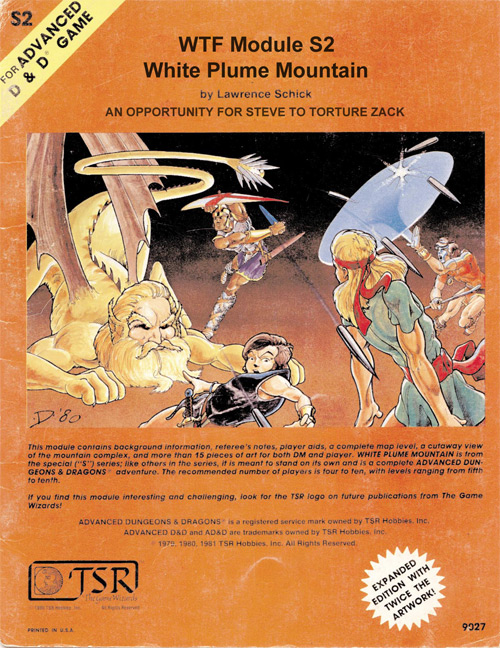 Zack: We didn't really receive any requests for this one and I'm not too familiar with it. Steve, on the other hand, lobbied hard to do White Plume Mountain.

Steve: Hell yeah I did. When I was about 9 or 10 my friend Donnie's sister ran this module for me and Donnie. It was one of my first D&D experiences. I barely knew how to play, but she was like this goddess who was 14 or something and she was creating this whole world in our imaginations.

Zack: That sounds like psychotic behavior coming from a 14-year-old girl.

Steve: I don't know dude, maybe she was crazy, but all I know is when I was 10 and playing Battle Man the fighter I totally wanted to be lured to my death by a kelpie.

Zack: This just gets worse.

Steve: If only Donnie hadn't been there man it was hot and heavy. I think she even said the word "boobs" at one point.

Zack: So your entire memory of this adventure was a seaweed lady?

Steve: I remember some other things. Some puzzles and stuff.

Zack: Oh, great, well since you're the expert are you going to run me through this adventure?

Steve: Sure, dude. I don't think it has a sweet picture book like the UFO one, but I can improvise.

Steve: What is your character?

Steve: What do you wield?

Zack: The black magic of the sepulcher.

Zack: Buddy Jones abhors violence unless it is committed by skeletal proxy.

Zack: I prefer to show, not tell.