BIG Time Bu$iness Web Sites, submitted by Justib. Whew! I can almost feel the hatemail from that update flowing into my bloodstream right now, but until then let's take a breather with a nice and horrid ALoD.

BIG Time Bu$iness Web Sites is the Internet equivalent of some sort of back-alley Tijuana bazaar where they sell white babies, human organs, and dinosaur bile under tarps. The site is bright, extremely confusing to the point of being overwhelming, and much like you're probably going to end up dead in that Mexican back-alley your browser has about a 3 out of 4 chance of perishing upon opening this site. 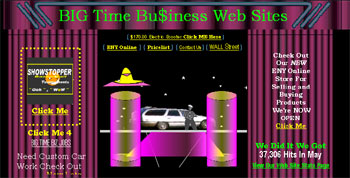 Come back to our site regularly to see our monthly 3D Animations which we release on the first of each month. IN JULY 2003 Check out ATTACK of The WEbMAster 3D Animation Movie. View our NEW UCC MTA IRT #3 Shuttle Train and The Livonia Avenue Walkway Bridge Signature Petition Information Pages. Brooklyn resident's are digging in because it's going to be a long { David= UCC MTA Petition } against { Goliath= The MTA } WAR, and we are going to win ! " NEXT STOP ", " " Positive Change " ! This is going to be a battle of epic proportions, one that will go down in the history books after 50 year's of MTA neglect. This shall be one of " The Greatest Community Activist Battles WON during the decade of 2000 Inside of East New York & Brownsville Brooklyn for increased transportation services for all Brooklyn MTA Riders !

I have no clue what the fuck he's talking about.

Big Time is the perfect example of a guy with no grounding in reality and way too much time on his hands. He probably spends every waking minute working on incoherent and painful animations, new contests, and "hot" deals for his web site. A site that has fewer hits than the webcam of an old fat guy.