Tuesday, Sep 09, 2003 by Rich "Lowtax" Kyanka (@TwitterHasBannedAllMyAccountsEver)
Know of an awful site? Send it to us and become a hero!

Kurai.com, submitted by Inharmonic. You have to be pretty lonely to write anime fan fiction, and that's simply a act which cannot be debated. The whole term "fan fiction" in itself is a terribly depressing thing, inferring that the author is so detached from reality that they have decided to write stories about their favorite fictional characters engaging in events which are not only outlandish but they're usually spelled incorrectly as well. Kurai.com takes fan fiction to another level, a level which is terrible in just about every way conceivable, and then some brand new levels which were previously only scientific theories suggested by Albert Einstein. You see, this site is all about "Soulbonding," which is the act of forging a deep and complex relationship with fictional anime characters to the point where you're convinced these character inhabit our plane of reality and you expect to meet them the next time you use public transportation.

Look, this really isn't that hard. What it is, to me, is having an intimacy with a character. Feeling as though you understand a character so deeply that they are a part of you.

With fanfic it gets tricky. In terms of a character you didn't create, the basic definition is the same--you feel a connection to the character you met through a game, or a book, or a television show, or a movie, or whatever form of entertainment introduced you to him/her. Because of this connection you feel as if this character now exists with you, and that you understand him/her when you're writing with or about him/her. I'll say now that I think the only person who can truly understand a character is the creator, however it is possible for anyone to develop an empathy with a created character. 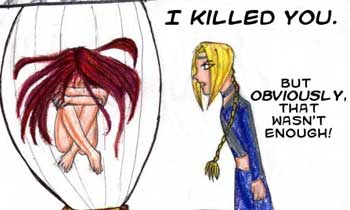 “Daughters from the future, eh?” Aegis said. “My, you’ve been busy.”

“Ye-yeah,” Kaitlyn said. She twirled a lock of ringlets around her finger. “Etienne and I are also kind of official now.”

“I thought as much,” Aegis said.

“I had a vague inkling.”

“Do you want to say hi?” Aegis nodded at Xin and Rose.

WOW, I TOO FEEL A DEEP PSYCHOLOGICAL CONNECTION TO "SAILOR MOON" CHARACTERS! And here I was, falsely believing I was the only person who felt as if Sailor Neptune inhabited my skull and revealed my true enemies and how they conspire against me. Not only are the authors here batshit insane, but they are batshit insane and have a batshit insane amount of free time on their hands. One chapter of Sailor Moon fan fiction is bad enough, but what about seven? How about "The Claris Project" which revolves around some fighting game anime shit and is composed of over 500,000,000 words spanning half of the known Internet? I guess this is a better hobby than dressing up like a clown and murdering children. I guess.