There are some things in this world that are better left unexplained. The dark mystery that shrouded the Arby's off of Interstate 94 was something no sane human could witness and go unscathed. It is a black mark on the earth, forsaken by God and man alike. With each fold of roast beef pulled back to reveal a terrible secret, 10 more folds will appear underneath in a never ending game of deceit. Much like the curly fry, the truth here is twisted until confusion and ultimately madness set in. With a wink, a whisper, and a smile, countless innocents have been lured to their demise by the promise of fast meals, to find only doom. Will you be able to grasp the horror that is the Arby's Mysteries, or like the countless others, forfeit your soul to the grease trap that is Arby's restaurant #1255?

To solve these mysteries you need to be quick of wit and wile, for this is the most fattening game of whodunit ever committed to the written word. Put your thinking cap and your X-Files t-shirt on to see if you are up to par with the dashing Fox Mulder and his redheaded floozy sidekick. Check the answers at the end of the update to see if you guessed right!

The Case of the Missing Napkins

Young Robert Henderson was working the morning shift at Arby's #1255 when he noticed something strange was afoot. The condiment island that he had just spent an hour stocking was devoid of napkins, a task he was positive he fulfilled. Regardless, Robert refilled the empty napkin holder, and went back to slicing the roast beef he was preparing for the sandwiches that day. When he finished slicing, he noticed that all of the napkins had disappeared once again! This was mighty queer, so Robert called his manager at home to report the problem. His manager berated Robert harshly for waking him up for such a mundane problem. Puzzled and upset at the verbal reproach he just received, Robert decided to restock the napkins and watch them for the rest of the afternoon. Only an hour into his stakeout, he blinked and the napkins were gone again!

Then Robert went crazy and shot himself in the mouth, but he lived because he angled the gun at the last second and it went through his cheek instead. He called off the rest of the day sick.

Who stole the missing napkins?

Vernon McGee is a regular at the Arby's on I94, and everyday he gets a roast beef sandwich for lunch. Like usual, the roast beef sandwiches are terrible. The beef is yellow and as tough as shoe leather. Why does Vernon buy one of these to consume everyday? Because he is stupid, bordering on mildly retarded, and has "proud to be an American" bumper stickers all over his pickup truck. One day Vernon slapped down his cash for another vile sandwich and was shocked and appalled to find that it was absolutely delicious. He complained to the manager, who tried a bite and was just as amazed. The beef was moist, succulent, and flavorful, not at all like a normal Arby's sandwich. What was this imposter doing in his store and how did it come to be? The premises were searched, but no other tasty roast beef concoctions were to be found. This was a diamond among coals, and it had to be preserved so it could be sent to the Arby's headquarters in Wisconsin. After some haggling, Vernon was paid a hefty sum for his troubles and silence.

Where did the tasty roast beef sandwich come from?

Few can explain the mystery of the manager's mustache. He's 32, a graduate from Big Babe's Business school, and a softball league 3rd baseman. The manager is content with his position at Arby's store #1255. He wanted to play bass guitar in a rock n roll band for a living, but he gave up those dreams years ago (about two years ago, to be exact). He now wields his unquestionable power over the denizens of Arby's with an iron fist. The source of this authority and power is his jet-black mustache, which sits atop his upper lip like a hairy gargoyle -- always watching, always waiting. It never sleeps. The employees have come to fear this mustache, and bow before its imposing semblance like a whipped dogs, scrambling to fill food orders when it is near.

Then one day, a hero rose to challenge the manager in an epic that the prophets foresaw thousands of years ago. The fearless employee was named Jeff and he toppled the terrible tyrant, bringing about a new age of peace. The Arby's employees were now free, and they all went to the zoo to watch the penguins.

How did Jeff defeat the manager's mustache?

The Voice From the Drive-Thru Speaker

One day while Robert was manning the drive-thru window and discussing the merits of the new Fantastic Four movie with Jamal, who was stationed at the deep fryer, a warbly and distorted voice came out of the speaker box. It was an otherworldly voice from beyond, making demands in a tongue long forgotten by man. Jamal's eyes grew so wide that they popped out of his head and fell into the deep fryer, instantly cooking them into a new Arby's treat. Robert hardly noticed as the ghostly voice rasped from his speaker, making his knees knock together like a pair of bongo drums being played by a swarthy, godless native. It wouldn't stop and Robert went mad and shot himself in the head, this time killing himself. Jamal couldn't see a thing, on account of his eyes being served to a customer, so he wandered into the storage room and took a nap.

What was the voice coming from the speaker?

The Miscarriage in the Women's Restroom

Arby's is a place where one lives, loves, and loses. Some find happiness at the bottom of their large fry container; while others find only misery in the form of a mocha shake brain freeze. Many new lives are created right in the establishment, as pregnant women find it relaxing enough to let go of their vaginal fluids and plop out a miniature life form into the plastic booth, where it claws and struggles though the sticky embryonic fluid for its first fried meal. But sometimes things do not always go as planned, as Susan, an Arby's employee for 3 months, learned on Saturday afternoon while cleaning the women's restroom. In the sink there was a bloody fetus, holding a single curly fry in its tiny fist. It was long dead, so Susan ate the fry since it obviously wasn't going to use it. Who would do such a thing, and why? Susan wrapped the fetus up in some napkins and brought it into the kitchen, where some of the guys deep-fried it on a dare.

Who killed the baby?

The Arby's special sauce has puzzled mankind for centuries. What was that odd, zesty flavor that seemed so familiar? Why did it make sandwiches taste so much better? The special sauce at store #1255 was extraordinarily good, so much so that customers couldn't get enough of it and they had to make 5 times as much as other Arby's restaurants. Some customers even got in fights over the last cup of it, and this lead to some violent scenes involving gunplay and foul language.

So what makes the special sauce so special?

Did you survive this rollercoaster ride of thrills, chills, and spills? No? Oh no that must mean that you are a ghost haunting my waking life for killing you with my awful update. Please go away ghost, leave me be. 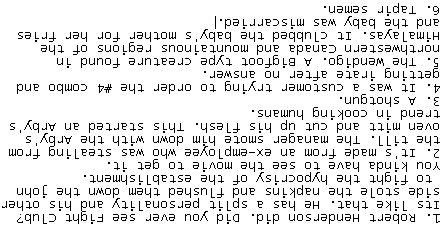 A lot of people were pretty sore at me for saying that Dumbledore dies a few days before the book came out, but at the time I had no idea and just guessed out of the probable characters that she would kill off. It really wasn't my intent to destroy so many lives and harvest the sweet nerd tears for my flower garden. I'll share my favorite email from the PR disaster of last week:


OMG why? You didn't need to put in big black bold font on your front page with the spoiler to the book. Nothing can repair what you've done to me...

Oh god...what have I done. These hands, stained with innocent blood. I offer my humble apologies HERE.