Democrats: Bin Laden Determined to Be Mentioned by Us 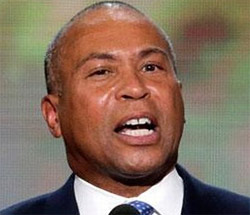 The non-union custodians have swept up all the confetti, Chris Matthews has changed his soiled girdle, and the last reaction shot of an old lady crying for the President's speech has faded from TVs across the slumbering nation. It's over. The DNC's three-day celebration of the death of Osama Bin Laden has concluded with literally a hundred-hour speech from Joe Biden and a Hope-ectomy from the President.

The Democratic National Convention in Charlotte, North Carolina, has been a lumpy porridge of testimonials from women, minorities, and veterans, set against the backdrop of scathing rhetoric directed at the GOP. It was the March of Dimes meets March of the Pigs. At one point a woman softly related the story of her unfortunate uterus. Minutes later she was replaced at the microphone by a man screaming about inequality until his face looked greased with sweat.

The bile often came from unexpected places. On day three it was a brutal indictment of GOP foreign policy from, of all people, John Kerry. On day one, former Ohio Governor Ted Strickland, a mild-mannered corn cob with all the heat of a week-old thermos, suddenly erupted with a broadside on Romney over the auto bailouts and his use of offshore tax shelters. 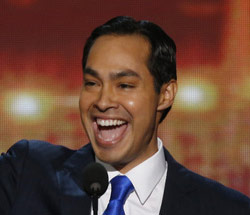 There was no shortage of past and future Democratic stars willing to blast holes in Romney and Ryan below the water line. From the bellowing of Deval Patrick to Mayor Julian Castro, the miniature latino with the grin, it was an onslaught that must have left the Romney campaign feeling a little besieged. The DNC was crushing the RNC.

Lucky for the Republicans, Democrats will knock over a baby carriage in their rush to snatch defeat from the jaws of a victory. Day two saw a debacle in which Democrats altered their platform by removing references to God and Jerusalem as the capital of Israel. The Republicans pounced, and in a few short hours Obama intervened personally to force the language back into the party's platform. Democrats on the floor booed the change and were overruled by the gavel. It was an ugly incident reminiscent of the RNC and John Boehner's use of the gavel to overwhelm the shouts of Ron Paul supporters.

The Democrats also decided on Wednesday morning to avoid a potential thunderstorm and move Obama's last-day speech from the Charlotte Panther's stadium - referred to as "Black Panther Stadium" by pompous cyber-smeg Rush Limbaugh - to the much-smaller convention hall. There was no thunderstorm.