Jori and MoJo's State of the Union

Jori and MoJo's State of the Union, submitted by Goatbert. Whenever you get a show as popular as The West Wing and pack it full of sexual tension, you can be certain that someone out there will come up with adult fan fiction for it. But you can always hope that they won't. You can close your eyes tight and pray that no one will write a five-part series detailing Josh Lyman and Donna Moss getting it on while attempting to maintain that ever-so-glib Sorkin-style dialogue. You can try to convince yourself that no one would ever attempt to chronicle Danny Concannon's strained, business-like dirty talk with C.J. Cregg as he plows her. You can do your best to tune out the mere notion that anyone would ever write a first person perspective narrative of Abbey Bartlett analyzing the strength of the President's erection as a sign of the progression of his multiple sclerosis. But then again, CHOKE ON THIS:

"Yes, dear," he patronizes as he starts to pump in and out. The bed starts to shift back and forth with his motions, inching me further up the bed each time. I finally have to let go of his ass and grab the headboard instead to keep my head from crashing into it.

I close my eyes and make some ridiculous noises as he continues to drive into me harder than normal. And it's reassuring. Jed is healthy right now. Healthy and virile and strong. There will come a day when he won't be like this. When we won't be like this. I bite my lower lip to keep my emotions in check.

That day certainly hasn't arrived yet. Not by a long shot.

In some deep place inside, I feel the twinge begin then disappear. I'm not going to let it go that easily. I reposition my hips to change the angle to where I need it. It's not the best angle for Jed, but he'll get his turn soon enough.

I clench up everything down there and hold it, making my body tense even more. The muscles start to quiver under the strain, but I don't let up. I'm not giving in without a fight.

"Jesus, Abbey," Jed grunts and now I smile. "I hope you're getting close."

"I am," I assure him, taking one hand off the headboard to touch myself. Jed's mouth falls open so he can breathe. "Make me come, Jed."

The world of West Wing fan fiction, which I'm really sorry to say actually is a world, has its crown jewel in Jori and MoJo's State of the Union. They have story after story of all your favorite West Wing characters getting it on. And that includes slash fiction of Josh and Sam showing each other what it means to be a part of the President's staff. It also includes a story with Josh and Fox Mulder. Like the world would have stopped spinning if that misbegotten crossover never came into existence. And then there's the Barbie Theater. Because there has to be a Barbie Theater. Because God hates me on a personal level. 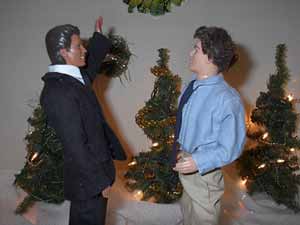 Then Sam notices that he and Josh are standing under a big swag of mistletoe . . .

As much as my face is frozen in a horrified grimace right now, I have to say that they really do make those dolls look like amazing likenesses of the characters. Especially since Sam Seaborn is a Cuban refugee. I hate this site. I really, really do.