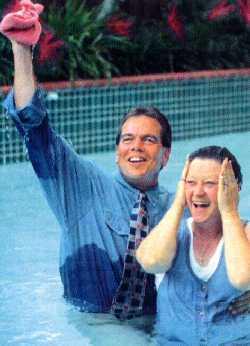 “The Second American Revolution has begun! Like the first, the Church of Jesus Christ must lead.”

Not even whole towns are safe from the awesome power of Jesus. Take Granite City, for example. I am not exactly sure where this is because the only location the website gives in its news article is "The Valley of Slaughter". Granite City is currently in flames for sinning against the Lord Jesus Christ and being generally evil. Not only has "A four block area that houses warehouses" gone up in flames, but now "a tire warehouse has also caught fire". For a town whose major industries are apparently "prostitution, drugs, and murder...of the preborn" you would think God would have a better aim, but maybe the corrupt tire warehouse industry commits more sins than the nearby abortion clinics.