Skunki's skunk quarters, submitted by Jay. I know I don't say this more often than once a week, but man do I hate furries. I just can't begin to put into the words the anger that they cause me, and it makes me even more angry when they act like they enjoy making me angry because I'm "mean and not open minded." The one consolation I have is that at the end of the day, I don't go home and put on a stupid cartoon animal costume and dream about fucking a giraffe with my massive horse cock on top of a giant rock in the Serengeti. Really, that's all I need to feel good about myself. But enough about me, let's talk about this Awful Link! Surprise, it's a furry! Hellloooo Stinky! 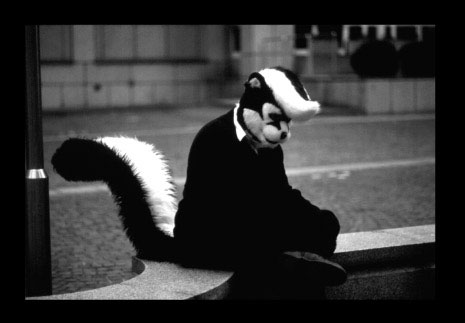 How did I get my character "Skunki"?
I use "Skunki" on Furnet because, I liked the skunk who wasn't allowed to get into Donald's house in the Micky Mouse Magazin Nr.31/1981 just because he was a skunk (is that a reason?).

I looked at the second picture and I'm sure, he was *very* sad. Skunks have feelings.....but no human cares, and ducks, too.

To be honest, I wouldn't let you in my house either. You kids think you can dress like animals and still enjoy the benefits of the civilized world, well, screw you. Go live in the wild you crazy dorks, because you can't have your cake and eat it to.

Things Skunki doesn't like:
Gravure and Flexo Printing, television, writing reports, ball pens, ASB (the German this time!), crowded places, BG'ler, Baggerseestukas, rain, guys who try to make him belive he is crazy, dumb Americans, the standard seats from Volkswagen, scritches in the paint of his Audi TT, some idiots who meet every Monday for drinking beer and believing they are divers (if one of them will ever read this, he'll know who I mean).

Okay, he definitely doesn't like me. I feel less bad about hoping somebody shoots him or runs him over now. I'm sorry, but the real world has no room for people dressed as cartoon animals expecting everybody to take them seriously and treat them as sane, rational people.