Furronika's Furry Art, submitted by Raphmatt. Like I was saying earlier, the internet has been a home to more forms of pornography than you can shake a massive, engorged stick at since its creation. One of the most disturbing forms of smut has always been furry porn, which is our buddy Furronika's specialty. We here at Something Awful feel that we speak for most of humanity when we say that we just don't understand what would make people find animals penetrating each other with genitalia that would cause massive internal bleeding on a normal person sexually stimulating. And we sure as hell don't know what would make a person so consumed with this desire that he or she would have to draw hundreds of images depicting it. But there you go. Read on at your own risk. 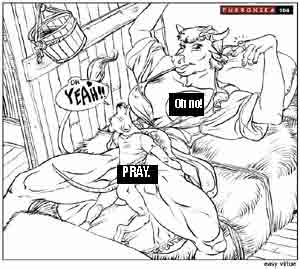 I'd like to say that that's the worst of it, but I would be lying, and my lies would sicken the Lord, and His Most Holy Vomit would rain down upon us and melt the flesh off of the unbaptized babies of the world, and well, I don't want to be the guy who's responsible for that one. Yes, Furronika has all sorts of grotesque furry art, from huge horse creatures with gargantuan penises, to tiny weasels with gargantuan penises. Oh, and of course there are the requisite pictures of humanoid Disney characters molesting each other. But that's hardly the high point of the site. After all, we're practically in 2004, here! Plain old furry art is passe! That's why Furronkia also offers a wide variety of straight-up bestiality! Although, to be honest, some of the bestiality stuff is really just borderline furry. For example, when you get a picture of two male centaurs gangraping a horse, how do you classify that? With a pained scream and nails in your eyes, that's how.