They're At It Again

Alert the media! Stop the presses! Cease all non-vital activity! Riot! Loot! Pillage! Rape! There is a storm brewing in the east, and its name is "Russia." The crazy Reds are up to their old dirty tricks once again. For years, we've gone about our good, God-fearing American business, confidant that Russia posed us no threat since the end of the Cold War. After all, the Communist regime collapsed in on itself, their economy was in shambles, their citizens were tired, poor, and listless, and their popular music was a bland rehash of what America got tired of fifteen years earlier. The Russians had too many internal problems to pose a threat to us anymore. Or did they? Is it possible that their guise of poverty and starvation was really just a diversion to distract us from the real truth - that they were laying in wait to spring the most diabolical attack on the American way of life that we have ever faced? In this writer's opinion, most certainly yes. If you don't believe me, just read on, and if you do believe me, you should probably read on anyway.

Russians in a village outside of Moscow intend to make the world's largest salad.

When all the chopping and mixing is done, the concoction of cucumbers, tomatoes and herbs is expected to weigh in at 2600 kilograms and make it into the Guiness book of world records, the ITAR-TASS news agency reported.

The mixing, incidentally, will be done with wooden spoons the size of human beings and in a plastic bowl with the diameter of three metres at the village of Kotelniki, it said. 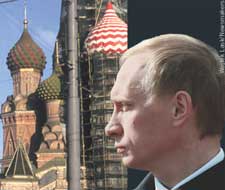 What fiendish plot is he overseeing now? A colossal bucket of chicken?

You heard it here first, ladies and gentlemen. Hidden in the quiet, unassuming village of Kotelniki - a small, snow-covered town far enough from any major military sites to avoid our suspicion, yet close enough to the Russian capital to get its orders from the nation's insidious leaders - the Ruskies are preparing to cement their place in the history of human events by making the largest salad the world has ever known. And what's worse, the American news media has no idea that this is going on! I had to find out from an Australian news site! It's a good thing I happen to scan news items coming in from seventy-eight different nations around the world on a daily basis, or this one might have slipped right under my radar. And that, my friends, would have been precisely what the commies wanted. They would absolutely love for us to go about our usual business, focusing on the simple day-to-day matters like Iraq, the video tape confirming that Osama bin Laden is alive and promising another horrible attack against American soil, and college football, while they use their man-sized spoons to toss the salad that time and spy satellites forgot. For then they would be able to leap ahead in the Salad Race, leaving us grasping feebly at our carrot peelers in an attempt to catch up. 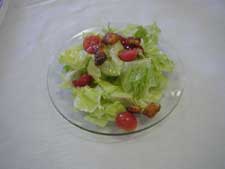 What's actually more disturbing than the thought of a salad a thousand times the size of this one is the fact that somebody actually took the time to compose and develop this picture. I mean, it's a fucking salad.

The implications of this giant salad are frightening indeed. First of all, it reveals just how monstrously far the Reds will go to gain an advantage over the United States and our unwary and essentially useless allies. For years, the Russian citizenry stood in lines miles long just to get their frostbitten hands on a loaf of bread. Hunger swept across the massive, frozen country like a proletariat revolution. Meanwhile, as the people starved and death and illness crippled entire cities, their government was cultivating vast fields of nourishing, nutritional vegetables to stockpile until all the preparations were made to complete their monolithic salad. Clearly, the Russian leaders are more concerned with their victory than they are with the well-being of their own people. This sort of attitude is demonstrative of the sort of inhuman fiends that control Russia, as well as it's military, and obviously as well as its food preparation industry.

And what about the contents of this gargantuan salad? "Cucumbers, tomatoes and herbs?" Just what sort of salad is that? I'll tell you what kind - an un-American salad. A commie salad. Perhaps even a terrorist salad! Who makes a 2600 kilogram salad with just cucumbers, tomatoes and herbs? Where are the carrots? Where are the onions? Where are the croutons, baco-bits, and/or little brown Chinese crunchy things? And where the hell is the lettuce? There are only three kinds of salads that can get away with not having lettuce - fruit salad, potato salad, and pasta salad. And none of those are made with cucumbers, tomatoes and herbs. So what's the game? What are Comrade Putin and his cadre of vodka-sipping, kitten-punching sycophants up to? They're leaving the lettuce out on purpose! They're deliberately making this mammoth salad (mmm... mammoth salad) a huge, well-mixed bowl of anti-American propaganda! The ingredients of this radish-red salad were carefully chosen, my friends. The cucumber, truly the most phallic of the peeled vegetables, is there to signify that the Russians think that they have bigger wangs than us fine, upstanding, sexy Americans. The tomatoes are red, the color of the communist threat that will soon be spreading across the East once more. And the herbs are there to give this earth-shaking salad the bitter taste of a totalitarian superpower on the rise!

This image will haunt my dreams for years to come.

And think about the technology that the Russians are using to make this godless salad a reality. Here, let me refresh your memory: "wooden spoons the size of human beings." Just picture them! Spoons that could crush a man in one fell swoop! Where did they get this sort of incredibly dangerous cutlery? My guess is that they have ties with Al Quaeda. I suggest we mount a fullscale inspection of Russian soil to see just how many of these monumental spoons they have in their arsenal. And we have to keep a sharp eye. If they have giant wooden spoons, then they could very well have giant forks and knives, too! You know how much communists hate to have incomplete dining sets. We have to confiscate and destroy these weapons of mass consumption before they can be turned against us. And in the mean time, we should begin stockpiling giant silverware of our own. When the war comes between America and Russia, capitalism and communism, West and East, good and evil, it will not be fought in the streets and in the deserts. No, it will be fought on a dining room table so impossible huge that we will have to set up sweatshops all across the South Pacific just to make a tablecloth big enough to cover it! My fellow Americans, we cannot allow the Soviet menace to gain the upper hand in the comically big silverware race!

As much as the giant silverware is troubling, this is still about the salad. It's too late to try to put together a record-shattering salad. The Russians have that one in their little red property-sharing, wealth-redistributing bag. We can't put that kind of pressure on our nation's farmers. That's not the sort of thing that we would to do our own people, unlike a certain nation I can think of (hint: it rhymes with "Mussia"). But all is not lost. This is just the first battle. The war has a ways to go. We can still take the lead in the struggle for dominance over food that you don't win friends with. The Russians have their 2600 kg salad. We will make a thirty-foot Boca burger. They will fill their vats with the world's largest supply of soy milk. We will make a Tofurkey so immense that when this war is over and truth, justice, and the American way reign supreme once again, we will actually build high priced condos on it.

I should have known better than to even think about another solution. TV is always the answer!

Yes, life will be good when we finally crush the Russians' hopes of ever being able to achieve anything ever again without us firmly spanking those borscht-brewers back to the bread lines. But from the looks of things, that sort of peace will be a long way off. Oh, how I dream of the time when once again we will be able to think not of how pointlessly big we can make food, but how incredibly small we can make food, and how we can somehow still raise prices. That will be true success. I know there are many of you who cringe or shudder at the thought of a long, drawn out war of enormous foodstuffs. Well, don't you fret. Because even though, unlike you pussies, I am prepared to face this conflict for as long as it has to go, I have still put my steel trap mind to work to figure out a way to end this things quickly. We will put our best giant-food chefs to work against the best that Russia has to offer in a court presided over by a neutral entity, in this case Japan. That's right, the Unstoppable Empire from the West will square off against the Frost Golem of the East in the only forum adequately prepared to handle this sort of duel - TV's Iron Chef. If we can get the Russians to stop eating zakuskies and growing chest hair long enough to agree to the terms, I'm confidant that our boys can beat those vodka-jockeys at their own oversized game. And think how exciting it will be when Chairman Takeshi announces the secret huge ingredient! It'll be television history! The winner will get their name in the record books. The loser will be hit with severe sanctions against any food product larger that an amount to be determined by a well-funded committee. So once again, an international war can be averted on television, thanks to me.