Alamo Christian Ministries Online, submitted by peengers. Tony Alamo is what happens when a evangelical former Jew and zealously anti-Catholic minister merges with a nutjob conspiracy theorist who thinks we're ruled by a world government. Not surprisingly every one of his sermons that has been placed on the site includes repeated references to the evils of Catholicism and the sinister "One-World Government". 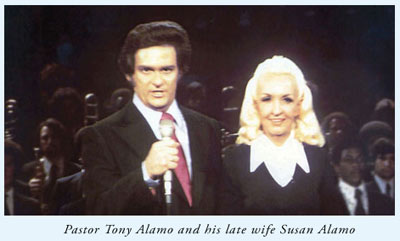 After quitting his diabolical work for Rome, under the pretense of being part of the United States government, John G. Peeler tells how the United States of America’s law enforcement agencies are enforcing the Pope in Rome’s will on U.S. citizens. All of its secret societies pretend to be the servants and the protectors of not only the U.S. citizens but the citizens of the world.1 However, in reality, Mr. Peeler and many thousands of other former government people say they were out to destroy U.S. citizens, as well as the citizens in all the other nations of the world.

Praise the lord! If you have Real Player installed be sure to check out their cornily earnest renditions of various songs. Come on Tony, get with the times and right some hokey rap song about the Catholic church and the One-World Government killing US citizens.