A Voice for Men

A Voice For Men - yes, men are finally being given a voice - is essentially the "intellectual wing" of the men's rights movement, which is fighting a multi-front war against the tyranny of feminism, the scourge of fake rape accusations, and the insulting omnipresence of those doofus dads in TV commercials.

The site is notorious for challenging the matriarchy with thought-provoking articles like "On Jury Nullification and Rape" (jurors are urged to acquit anyone accused of rape because the whole freakin' system is out of order) and "I'll decide if you were raped, not you" (I smell a Judge Judy spin-off!). AVfM prefaces these columns with lengthy disclaimers about how they're willfully inflammatory works of satire that are "not typical at all of AVfM content," which they had to put up because for some weird reason gotcha bloggers kept trying to use their own words against them. Of course, this suggests all the other goofball columns like "misogynist is the new N-word" and "if I were to see a woman being raped I would continue on as if nothing ever happened" contain actual, sincere opinions held by real human beings.

"The value of male sexuality" is something of a primer on how the community views gender relations:

Woman: Hi, I stink of numerous other men's intimate attention and I'm about half as attractive as you. Shall we go through a social dance in which you pretend that you're getting something worth having from me?

Man: My natural instincts tell me to hold on to my sexual resources for high status, unmated females, but you're granting me access to the one thing I've been trained all my life to respond to like a performing monkey. Do you mind if a part of me weeps silently while we have sex?

Woman: Whatever. As long as I get my ape on, I couldn't care less.

Next to she-demons trying to take advantage of men's precious sperm, male-bashing media outlets are perhaps AVfM's favorite target. For example, whenever there's a tragedy, dead women and children hog the spotlight, unfairly overshadowing male deaths. This is why an AVfM contributor cried for the first time in 30 years upon hearing closet red-piller Rachel Maddow specifically confirm that the victims of a mining disaster were all men, instead of this just being implied. Then, in the wake of Elliot Rodger's day of reckoning, some mainstream (more like misanstream) media sites tried to pin the blame on "the manosphere." Wouldn't you know it, though, turns out he killed those people because of feminism.

To help spread the word about these injustices, A Voice for Men recently crowdfunded the first-ever international men's rights conference, also known as PAX East. On the home front, AVfM's creative team is working hard to help you alienate loved ones on Facebook with its weekly image memes, while founder Paul Elam is hoping to enlist some celebrities to the cause by showing them weird photoshops.

It's only a matter of time until feminism comes crashing down, and it looks like the digital fake crypto-currency Bitcoin is going to be the catalyst, somehow. But as long as physical currency is still around, why not splurge on the official A Voice for Men commemorative coin? It features a lovely image of... a torn condom? A pizza with an anime sweat drop? Alex Mack after she became so ashamed of her sex that she morphed into a puddle forever? 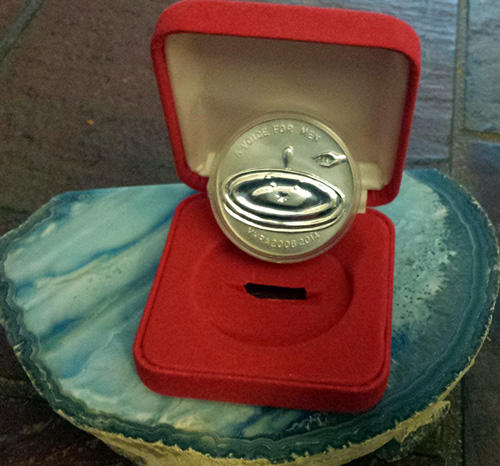 AVfM isn't the best at handling criticism in general, but they're extra sensitive about that stupid coin. As David Futrelle discovered, their Activism Director will hire a private investigator (read: Google) and feebly try to "doxx" you if you make fun of the coin, which seems like a perfectly rational, adult response to a few online zingers.

This is Josh "Livestock" Boruff, signing off.