Thursday, Feb 05, 2004 by Rich "Lowtax" Kyanka (@TwitterHasBannedAllMyAccountsEver)
Know of an awful site? Send it to us and become a hero! 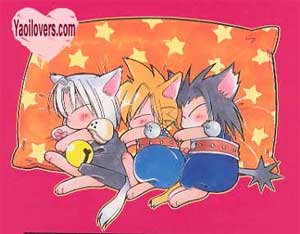 “Master…” he muttered softly and felt his blood warm. He had forgotten that Vegeta had forbidden him to call him that. It was a good thing that he was still asleep or he would be in a lot of trouble. “My prince…”

He let his fingers run idly along the edge of the sheets then lifted them over his head and slowly climbed on to the bed. The heady scent of his master quickly surrounded him and almost toppled him. It was warm and fragrantly comforting. Goku was charged with an instant impulse to purr, but he restrained himself. He did not want to waken Vegeta. Not yet. His tail had no reservations about curling and lashing against the sheets. Its frenzied behavior was a result of Vegeta's scent and Goku had absolutely no way of controlling it.

Despite the actions of his tail, he moved very carefully, crawling forward on his hands and knees on either side of Vegeta's naked body. When he reached his target, he hovered over the warmth that was his master and studied his sizeable flesh.

The master is…large , he mused. Of course, he had known this, having seen the master in his bath, but somehow, up close, the member was even more amazing.

He ran his fingers down the long shaft and watched in surprise as it grew larger. Goku let out a small breath, stirring the dark hair that surrounded the rigid appendage. More of the prince's scent swirled around him. He thought that he would collapse from the heady aroma. None of his other masters had smelled this good. Oh, they had tried to hide their natural scents with perfumed oils and fruit based creams, but their underlying odors had always managed to sicken Goku.

PS: They have a guestbook you can sign but only if you're a big fan of Goku sucking Vegeta's dick, and honestly who isn't in these troubled times?