Thunderkitties, submitted by lunacrow. It's my sincere belief that in ten years entire cottage industries will exist that do nothing but analyze the psychology behind horrible webcomics. There are four types of webcomics as I see it; the horribly unfunny but sincere attempts at comedy, the horribly unfunny vanity comics, the creepy and serious comics that are usually epic and dull furry versions of Mary Worth, and the web comics that are so blazingly terrible and incoherent that they are hilarious. The best example of this last cateogry is definitely the incomparable Boston and Shaun, but nearly every day someone churns out a new gem of amusingly bad webcomic. Thunderkitties is one such gem, maybe only gilt around the glittering jewel of Boston and Shaun, but definitely worth examining. 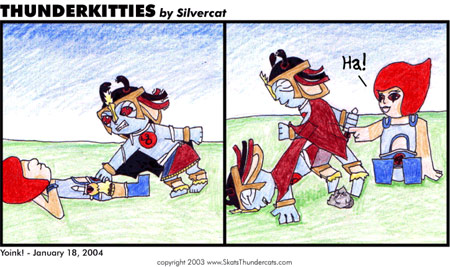 I'm Silvercat. I'm a silver and blue tyger Thunderian. I write Thunderkitties, Up at Silvercat's, and do Silvercat's Nitpicking Paradise. My favorite Thundercat is Tygra.
I can't think of anything to add here, so ask me some questions about myself!

Awwww, it thinks it's a Thundercat!

Not only that, Silvercat is doing a Thundercats themed webcomic with the furry precursor Thundercats as children and loaded with vague sexual innuendos (intentional or not) and multi-week spanning inane plots with art so bad that you can't actually make any sense of what's happening. My FAVORITE!

Okay, now I am REALLY confused. Baby Liono walked into a giant pussy and came out as an adult? Is that what happened or are my eyes and brain lying to me? Please tell me they are.