Thrashwolf's Den, submitted by Foxfire.Today I decided to go back to the Furry community to do a bit of sleuthing. In the past I've raised the question about how one goes about transforming into a furry. At what point in their life do the become so detached with reality that they actually think they are a large plush wolf? Maybe if we can get to the heart of this matter we can stop this horrible infection before it affects the younger generation of new internet users. I picked Thrashwolf's Den as a case study, a look into the mind of somebody that is deluded and confused, a lost soul that has found safety in furdom. Let's take a look.

"While growing up I was mostly (though indirectly) influenced by my mother. My father had a drug habit and I was afraid of him. My mom had a love for horror movies and animals. She especially loved "exotics". That's probably how I first saw wolves. I know she probably kept more but I can only remember Warlock, a very large dark-furred wolf she kept when I was around 12. He was beautiful and very gentle. I guess with all the animals I was exposed to, especially the wolves, instead of mapping my behavior after my parents (like children usually do) my personality became more like the wolves I felt akin to. So the horror movies that I most enjoyed were werewolf films, especially if they showed a good transformation scene. Though I know it mostly to be fantasy and Hollywood stereotypes, I do love the transformation. That has always been a dream to me: to be able to physically change into a different species, namely Canis Lupus. I want to be like my wolven brothers. Sometimes, I would transform in my dreams and run with them. Very vivid dreams, I can still remember how the wet grass felt beneath my feet. Although I never got a full view of what I looked like, just the paws beneath me, I somehow knew I was a wolf and I was happy."

I think I'm beginning to understand. Thrashwolf's father was a rolling stone who was to busy doing drugs and caused his son to fear him by his behavior. Thrashwolf was hurt by this as a child and his father was replaced by a wolf that his mother kept around. Instead of playing with other children and building social skills, he ran on all fours in the backyard, digging holes, chewing on bark, and howling at the moon. This leads me to the conclusion that most furries have had severe trauma or prolonged social exclusion that fostered of their supposed kinship the the animals who cannot reject them because they do not posses vocal chords. I guess it's better than joining the Neo-Nazis. 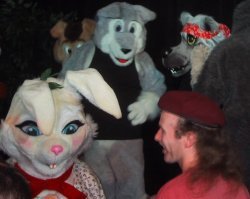 I bet this convention really smells.

Now that we have that out of the way, check out all the fursuit image pages for unrelenting chuckles. One thing I do admit is that the furries supply us with endless laughter. Thrashwolf also has a message board in case you guys want to know when the next convention is. I dare somebody to show up as an animal control officer with those lasso things. Please film it.