Times are hard for '90s movie mainstays, as proven by the "take any role you can get to pay your debts" attitude of Drive Angry star Nicolas Cage and the "when the hell was the last time we had a hit?" desperation of Hall Pass directors the Farrelly brothers. The news gets better after this week's reviews, with a look back at 2010's best.

EXPECTATIONS: As a premise, Nic Cage breaking out of hell to rescue his granddaughter from a Satan-worshiping cult with a demonic William Fichtner in pursuit is just something that cannot go wrong. With tongue firmly in cheek, I must drive as angrily as humanly possible to the nearest cinema and gorge myself on Drive Angry.

REALITY: Featuring one of the most entertaining performances from a movie antagonist for many years, a plethora of high-speed action sequences and a huge helping of self-aware humour, Drive Angry can be damned entertaining, as long as audiences embrace it with every ounce of adolescence they have within them.

After escaping from the last great prison that we're all sentenced to, Milton (Nicolas Cage) wastes no time in starting his hunt for baby-sacrificing cult leader Jonah King (Billy Burke), in an effort to avenge his murdered daughter and recover his infant granddaughter before the next full moon. With the help of waitress and petrolhead Piper (Amber Heard), Milton makes his way to Louisiana, leaving a trail of bodies in his wake. He'd better watch out though, because Satan's accountant (William Fichtner) is hot on his trail, and he's hiding a double purpose. 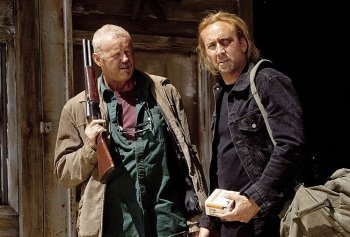 David Morse shows up, as he is known to do. You may also be unsurprised to learn that Tom Atkins cameos in this film as a grizzled police captain.It sounds like a lot of fun, doesn't it? Well, for the most part, it is. The film starts as it means to go on, with cartoonishly brutal violence and a breakneck pace, interspersed with the coolest possible one-liners ("Hell already is walking the Earth") and ably scored by a very appropriate wailing guitar soundtrack. However, it starts to sag when the film tries too hard to be exploitative, throwing as much shit at the audience as possible early on, probably in the hopes that anyone who is offended by this stuff doesn't have a chance to walk out before they really get their feelings hurt. Consider the scene in which Cage is having sex whilst fully clothed - complete with leather jacket and sunglasses - smoking a cigar, drinking whiskey straight from the bottle and shooting people all at the same time and you can see what I mean.

However, around about the halfway mark Drive Angry settles into a purposeful chase-thriller scenario that just never lets up. Cars explode, people explode, the boundaries to the afterlife explode, and it's all played for cathartic laughs, without ever falling into the conservative Internet-virgin-pandering trap that the Crank films do. There are even shades of Clive Barker-style sex-religion horror going on, with a messianic figure who is just irritated by his worshipers missing the point of what he represents. Not to mention an incredibly positive idea that even in the afterlife you can find some redemption and maybe even have a little fun.

Speaking of fun, I'd like to talk about William Fichtner for a while, and I do hope you will stop me if I begin to gush. As The Accountant, Fichtner is clearly having an absolute blast, yet he somehow manages to turn in a performance that's as subtle as it is outlandish. Even with his cool and calm exterior, The Accountant begins the film giving the impression that he doesn't quite fit into his own skin and isn't quite used to human interactions. Only later, when he starts to relax into the job and his body, does he start to really enjoy himself. It is this sense of fun -- and his warming up to Milton -- that make him such an interesting and entertaining character. In the end, he and Milton display great chemistry, despite sharing very little screentime together previously. It's the kind of fully realised and brilliantly executed performance arc that you so rarely see in films of this type. If they ever do a sequel, I'd like to see Milton and The Accountant in a buddy-cop road movie, hunting down wayward souls and fist-bumping like bros. 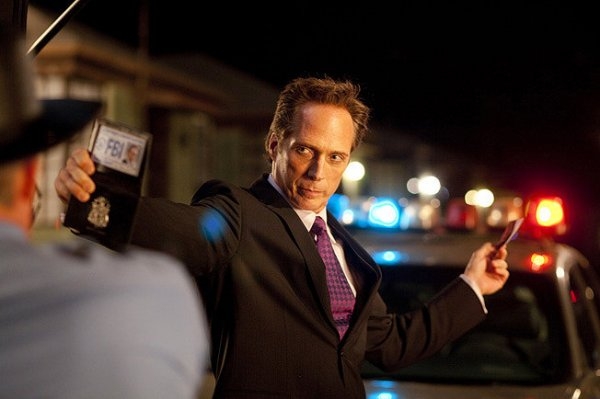 I'm not sure what makes William Fichtner so immediately compelling, maybe it's the tie?

Some of the main weaknesses of this film lie more in what it doesn't do than in what it tries to do. Milton carries a gun known as the "God-killer" that not only destroys your body in a spectacular way but also obliterates your soul so you never get to see the afterlife. He explains to The Accountant that he was able to just "walk in and take it" after escaping the pit. I just wish they'd given us some explanation as to how he got out, what the hell the God-killer is and why it exists, how he was able to get back to Earth from Hell and perhaps the most important: Did he ever meet his daughter in the afterlife? These are all questions that hang there: We don't necessarily need these answers in order to enjoy the film, but details like that can niggle away at you, especially as more fantasy elements are introduced. In the end, they all feel a bit like missing jigsaw pieces that would have made the film feel more complete.

Now it's time for a bold statement, because we must not be afraid to make them if we believe them: Drive Angry features the single most innovative use of 3-D I have ever seen. There is a scene in which Milton has a flashback about what happened to his daughter (he has seen this because he is forced to watch his loved ones suffer while he burns in Hell), but rather than a conventional flashback scene, the image begins in the reflections of Milton's windscreen as he drives and builds up multiple visual layers that play out simultaneously. These are the ideas I've been waiting to come along and revolutionise the gimmick of forcing adults to wear 3-D glasses in cinemas. Now that this is out there, I hope other directors are brave and shameless enough to steal it and use it in more experimental ways. If 3-D is here to stay, then it's about damn time someone took a chance with something like this, and I think director Patrick Lussier deserves more praise than he is getting for being the one who did it.

MINORITY REPORT: I had some experience hunting down fugitives myself. I favoured the method of employing a dozen trained and starved boars. I say trained, but you never really can tame a boar, you know? I would let the boars loose in busy city centres on Saturday afternoons, knowing that they would apprehend any fugitives on sight. I always came in well above my quota. - Montague "Legally Sane" Smythe