Duct Tape Fashion, submitted by WetWired. Remember that one dude back in high school who made an entire outfit for himself out of duct tape? Remember how quirky he was, and how it was kind of neat that he put in so much effort to something that was really pretty useless in the end? Good times, right? Maybe you thought that guy was unique in his ingenuity. He wasn't. Everyone knows someone who has done something like that. But as long as you only know one or two people who have actually made clothes entirely out of duct tape, it still seems kind of neat. Naturally, the internet came along to suck the fun out of this practice by taking it to levels that make you question how we ever became the dominant superpower in the world. The Duct Tape Fashion Gallery is home to ten solid pages of duct tape clothing, costumes, and accessories. It's not a store, it's not a fetish (at least, not a readily apparent one), but it somehow manages to suck all the fun out of the concept. How, you ask? Well, like this: 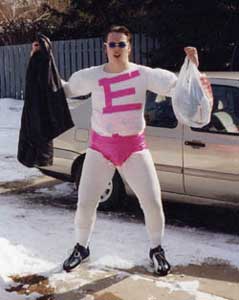 Yes, that man is wearing a pink duct tape codpiece. And he allowed himself to be photographed. Sadly, the disturbed gentleman above is nothing compared to some of the other contributors to this gallery of duct tape infamy. Don't get me wrong, he's still lame, just for different reasons. Some of the outfits people have constructed out of duct tape are incredibly intricate, which merits the question, why do these people have all this free time? And for the record, why do they have all this duct tape? This explains why I can never seem to find any duct tape when I need it for some important purpose, such as tapings up ducts. Sadly, the Duct Tape Fashion Gallery is actually just one facet of a much larger duct tape-themed site, but trying to tackle it all at once would be too much to handle. The sheer amount of time and energy that has been devoted to promoting the various applications of duct tape, a subject that anyone who has ever handled duct tape is perfectly capable of mastering on their own, is both frightening and oddly depressing. Especially when you realize that someone has actually dedicated time, energy, and hosting to things like this: 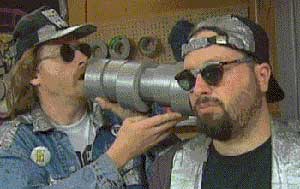 Duct Tape Phone
Remember the tin-can phones you used to make when you were a kid? Jim and Tim demonstrate the latest in telephone technology: The Duct Tape Roll-O-Phone. Because of its modular design, you can easily extend its range.

IT'S A COUPLE OF HICKS WITH A BUNCH OF ROLLS OF DUCT TAPE. WHY WOULD ANYONE BOTHER TAKING A PICTURE OF THIS?