The Lost What If? Comic Archives

I wasn't very popular in high school. While my peers were playing team sports, attending social activities, and engaging in sexual congress with the opposite sex, I was in my basement organizing my comic collection and adding up their presumed value with my Wizard price guide. Not that all of my collecting was based on future investments, like my Image Comics #1 duplicates or 400 copies of the death of Superman. I mostly read for the enjoyment of the stories and fantastic tales of adventure. This is proven by my monthly subscription to the least popular Marvel comics ever created, the "What If?" series.

The plots are the kind of insipid nerd shit that guys that work at comic shops argue about for hours, like who would win if the Incredible Hulk fought Dr. Doom in a tank full of electric eels but he was blind and had a tail? It's this kind of masturbatory thinking that generated "What If?" -- a comic that would raise the serious questions that plague a collector, like "What if The Punisher was afraid of loud noises?" But some of these issues were even too nerdy for some of most hardcore fans. They were stored in the secret Marvel vault 5 miles underneath the earth's crust, hidden like a guilty secret, never to be revealed to the public. Until now.

How did I get my hands on these you ask? I dressed up as a sultry vixen, seduced Stan Lee at a Fantastic Four movie premiere, and stole the key to the secret vault while he was sleeping. I had to kiss an old man's balls for this so you'd better be thankful. 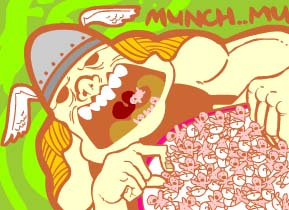 What If Thor Converted to Scientology?

Thor, a follower of the Norse gods, turns his back on Valhalla after attending a weekend Scientology seminar in Clearwater, Florida. His friends and family become concerned after he quickly converts, sells all his possessions, and gives everything he has to the church. Soon he starts really annoying his teammates on the Avengers when he keeps on trying to get them to take an e-meter test and do spiritual audits. He also grossed them out by eating a large plate of newborn babies, the Scientologist snack of choice, at the Freedom Cafeteria. Things got worse when Thor got into a fight with Moon Knight after he called Scientology a "brainwashing cult that preys on the weak and stupid." Captain America had no choice but to let Thor go. Then it turned out that Hubbard was right and everybody but the few pure souls are forever trapped into an alien ghost world.

Reason placed in the vault: It was clear that this comic was written by a Scientologist and was thus never published.

What If The Avengers fought the Care Bears?

In this reality, the burning question of who would win a fight between the Avengers and the Care Bears is finally answered. The Care Bears run afoul of the Avengers at a little league baseball game, after Iron Man's son is called out by the umpire. A typical overbearing pushy sports dad, Iron Man gets in a heated argument and blasts the ump with an energy ray, disintegrating him on the spot. The opposing team from a Care Bear league called the "Bad News Bears", was angered at the disruption of the game and attacked Iron Man, digging their claws into the seams in his armor and urinating on his joints, rendering him immobile. The rest of the Avengers heard his distress signal and came to the rescue. Thor came swooping down, smashing Love-a-Lot Bear with his hammer of power, Mjolnir. Captain America threw his trusty shield, decapitating Tenderheart Bear. The rest tried to flee across the field but were cut down by Silver Surfer.

Reason placed in the vault: Overall this comic was pretty bad and was only 3 pages long. It was placed in the rejection vault and the intern that wrote it was beaten to death with a rusty pipe.

What If Daredevil died?

These comics are full of realties where some superhero dies or is killed by another superhero. In this one, Daredevil is gets hit with a meteor while walking his dog. The funeral is a somber and respectful one, full of friends and family. Flashbacks are shown of his amazing feats and crimefighting adventures. Meanwhile, The Punisher, pleased as punch that Daredevil is no longer alive to meddle in his violent methods of dealing with criminals, throws a huge bash and everybody that hated Daredevil is invited, like Kingpin, Calypso, Bushwacker, and Aunt May. Then the comic took a turn for the gay when Daredevil's ghost shows up to the party and makes some strange noises in Punisher's basement. The Punisher hires an exorcist and Daredevil's spirit is sent to the 6th plane of hell where he becomes a cute mascot.

Reason placed in the vault: It was a terrible issue! 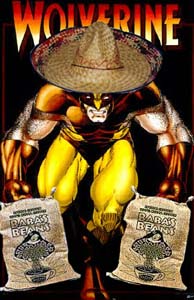 What If Wolverine was Mexican?

In this crazy reality, Wolverine was born in Mexico instead of Canada. That means that he wasn't used for the secret project that implanted the adamantium into his body and instead he grew up in a small village, becoming a coffee farmer. He owned a couple mules and ended up happily married with 10 children. Because he didn't become a superhero, the forces of evil run rampant in Canada, falling under the sway of the Ice Witch, Celion Dion. Also, Sabertooth becomes the president of the United States. Logan dies of old age under a crumbling adobe wall, with his arm around his mule "Francisco".

Reason placed in the vault: This was the most boring/stupid comic ever created.

What If Galactus Fell in Love With Ant Man?

Galactus is known for his passion for devouring planets, but not for his passion for homosexual relations with terrestrial beings. That's one of the reasons this issue doesn't work. The other is that he falls in love with the Avenger, Ant Man. In exchange for not destroying the Earth, Ant Man agrees to be another herald of Galactus and spend his days frolicking in space with this lovestruck giant. Silver Surfer gets really jealous and tries to kill Ant Man, but is foiled by Spider Man who shows up for no explained reason. Then Galactus tries to make love to Ant Man but tears him asunder with his enormous phallus. He shouts "NOOOOOOOOOOOOOO", and destroys the earth in anger.

Reason placed in the vault: The multiple panels of Galactus’ penis was probably the nail in the coffin for this comic.

What If Dr. Strange was a Drug Dealer?

Dr. Strange is known for being the master of the queer and unusual dark arts of magic. In this special issue he is also known for being the master of any wicked bud or killer acid that buyers are looking for. The whole wizard thing is just a front for his illegal drug selling activities. Superheros with dark secrets from all over world pay the good doctor a visit when they needed a little pick-me-up, and he was personally responsible for getting the Thing hooked on meth. At the end of the comic his empire comes crumbling down when his house is invaded by the DEA and he starts shooting them up like at the end of Scarface. The Punisher is the one who walks up behind him and blows him away. Then the Punisher takes over his drug cartel and grows a mustache.

Reason placed in the vault: The drug references were unappropriate for the young children buying the comic. Especially when Dr. Strange sold some smack to a bunch of school kids and transported one of them to the 5th dimension after he snitched. 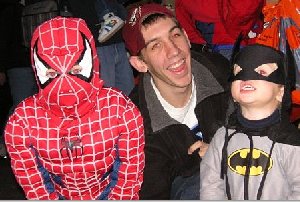 What if Spiderman fought Batman?

This actually seemed like it would be a really fun comic to read. Marvel and DC crossovers are always interesting, especially when two really cool characters have to fight each other. The whole comic builds up the battle between the two heroes, who due to a misunderstanding find themselves at odds. But just when they are about to exchange the first blows, Superman swoops in and straightens out the whole thing. Then they all go to the mall and go shopping for watches.

Reason placed in the vault: It was the biggest letdown in comic history. I wish they really killed Superman.

What If The Incredible Hulk Replaced Neil Armstrong on the Moon Landing?

In this one, Bruce Banner is the backup astronaut for the Apollo Mission and Neil Armstrong comes down with a severe case of shingles. Banner is sent in his stead, and is the first man to step on the moon. Then, during the flight back, Buzz Aldrin angers Banner and he turns into the Hulk. The extra weight throws the Apollo off course and they head towards the sun, where they all are vaporized 10 days later. This disaster makes it possible for the Russians to win the space race, and Communism covers the world in a dark blanket of oppression. The Incredible Hulk is posthumously given the highest military medal by the Communist new world order and his statue is erected in Red Square, replacing Lenin's. Then something happens and the world explodes.

Reason placed in the vault: Bruce Banner was afraid of heights.

Well we can see why Stan Lee never wanted these embarassing comics ever to see the light of day. The fact that he had a grand jury injunction forcing me not to say anything about the comics to anybody is clear evidence of how much they wanted to keep this under wraps. I’m like the Michael Moore of the comic world, except not as suave and well dressed. Hell, now I have to go in the closet and get out my old comics. This is a big step backward for me.

It’s true! My sources at bookstores around the globe have leaked the big surprise about the newest Harry Potter book. As always, Somethingawful is the first to report on this groundbreaking development. If you are a fan of the book and despise people who spoil all the fun in life because they are miserable bastards and enjoy the suffering of the innocent, then please ignore this paragraph and write me an angry letter.

Also check out the brand new Adventures of Hitlerdog #5! What zany mixups will Hitlerdog get himself into this time?