Barry Dutter, submitted by Darryl. Former comic book writer and self-proclaimed "America's Most Beloved Pop Culture Writer", Barry Dutter is a man of the world. He is also a famous movie star, as evidenced by the page devoted to the many movies he has been in. Look, he was in "Wild Things" in a scene with Matt Dillon! 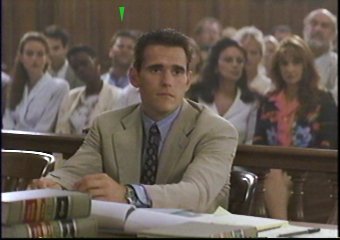 Dutter notes, "I've appeared in virtually every movie that's been filmed in South Florida from 1996 on." This includes such hits as WILD THINGS, THERE'S SOMETHING ABOUT MARY, and DONNIE BRASCO. Also a role as a TV news reporter in the Burt Reynolds/Richard Dreyfuss flick, THE CREW, which was released in August, 2000.

He's under the green arrow in the picture. I bet you didn't notice Barry Dutter there! That's because he's a chameleon. He's such a good actor that he just blends into the background in all of his many film roles. He can also teach you how to score beautiful washed out strippers with gigantic breast implants! What doesn't Barry Dutter do?